Luna moth, eggs and detailOne year ago, August 3-5, 2009, my girls and I were enjoying several emerging luna moths (species Actias luna). I had found a single female moth back in June 2009, in a clearing along a forest’s edge…a forest occupied by such residents as black gum, walnut, mockernut hickory, and sweet birch … the food of her offspring. I was mowing, and she was drying her dew laden wings in the morning sun. I encouraged her to crawl onto my hand and gently placed her in a terrarium. Well, that early June evening she laid 194 eggs, in our terrarium. We released her the next day. Over the ensuing 1.5 months we nursed caterpillars, feeding them mostly black walnut leaves. On July 21 they finished spinning cocoons of silk and leaves. There they sat, undergoing a magnificent transformation, until August 3. Fifty-seven days after “Mama Luna” laid her eggs, a new generation of moths began to emerge.

Luna caterpillar, setaeYesterday, August 11, 2010, my girls and I were gassing up at a local station. Out of the hot humid air fluttered a giant tattered male lune moth! Landing on the hood of our car, it appeared to be very near the end of its life, a wing missing and the others dangling like rags. Three of its legs were missing.

Luna caterpillar, abdominal prolegs.
This is what happens to lunas. Once in their adult form (moth) their purpose is very singular and focused: reproduction. They do not eat or sleep. They rarely live more than 7 or 8 days. During this very important final stage of their lives they fuel themselves on the resources accumulated while in the caterpillar stage (they are voracious eaters…I recorded feeding 21 caterpillars 100-150 walnut leaflets daily during last year’s observations!). So, the adults live for only a week, if they are lucky (most are snatched by predators).

Luna caterpillar, food and frassDespite the deep snows and hot summer, the phenology of these wonderful animals appears to be on exactly the same schedule as last year. The last of the Luna’s are flopping about right now! If you miss this round, you’ll have to wait until next year. It’s possible that some low elevation and southern areas of Virginia have three generations each year, but last year’s experiment demonstrated that central Virginia only gets two (however, overlapping broods may give the species a continuous summer presence in some areas). I suspect the same happens in the Mountains of Virginia, where at least two individuals have reported Luna sightings over the past two weeks at elevations above 2500 feet. 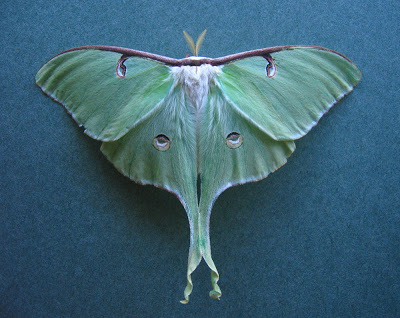 If you get to see one, treasure the moment. You are looking at something both beautiful and complex. You are looking at thousands of years of natural selection crunched into a moment and exhibited with designs that resemble twigs, buds and leaves. The wear the bold marks of their evolutionary past, marks that tell a story of millions of surprise ambushes. Expressed in these bold and beautiful marks is the essence of living and the inevitability of death.