I visited the Cooper’s Hawk yesterday. It remained perched in its usual spot for at least 2 1/2 hours. While I was taking some photographs, a train lurched by, and an enormous metal dinosaur continued its debris removal nearby, a building reduced to rubble. It’s been real cold; probably the longest stretch of teens (nighttime) we’ve had in decades. It was lovely to see the Cooper’s Hawk’s white breast catching the morning sun, and to see the sparrows and the rock doves going about their business…their activity slowly building with the growing warmth, their numbers increasing throughout the morning …growing to some critical mass that both provides the small birds with less of a chance of being eaten, and the hawk a better chance of getting food…power in numbers.

For a broader perspective of the area, see the photo above. It is a view from the bridge, and looks across what would be the southwest quadrant of the “Belmont Bridge ecosystem”

….and you’ll notice that in the trees to the right of the large “barn” is a tiny white spec….that’s the Cooper’s hawk.

In the photo below it is easy to see what the the bird hunter is up to, and how the hunted have devised a shielded approach to a feeder only feet away. Can you find the Cooper’s Hawk? 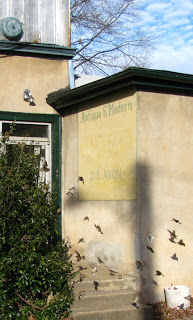 Here is a close-up of the sparrows’ technique. They leave in groups of 20-30 birds and fly low and swiftly to the feeder, and stay for no more than 10 seconds. 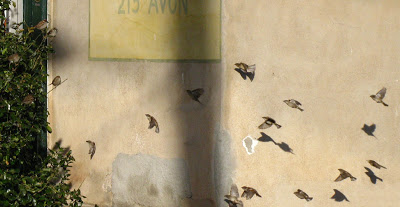 So, the back-n-forth hustle and bustle is quick and continuous. The birds don’t leave the holly shrubs until their numbers are high enough to go to the feeder in large groups. They sit and wait for others to arrive. But, they must eat. And the hawk will get one of them eventually. It is inevitable. The songbirds’ ultra-sensitive response to surrounding movements and sounds makes it clear that these birds have a long evolutionary history that includes being attacked by quick and stealthy predators (unlike, for instance, some of the flightless and otherwise “tame” birds of the Galapagos).

So, they all get on with it eventually…and prey gets seed, predator gets prey,

One thought on “Belmont Bridge Ecosytem, a Broad View”