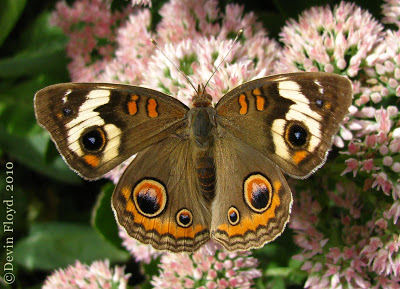 Buckeye butterfly, Junonia coenia
Kingdom: Animalia
Phylum: Arthropoda
Class: Insecta
Order: Lepidoptera
Superfamily: Papilionoidea
Family: Brush-footed butterflies (Nymphalidae)
Subfamily: True Brushfoots (Nymphalinae)
Genus: Junonia
Species: Junonia coenia
This September, in a school yard on Cutler Lane in Charlottesville, VA, a small patch of autumn joy has attracted hundreds of buckeyes. On sunny days they come in droves to this pink nectar source…and they are not alone. Skippers and cabbage white butterflies and bees and wasps …they all jump in for a sip. If you tip toe you can get real close. They are so distracted by the nectar that one may even be able to touch the hairy back of a butterfly…or even pick one up! Given the unusual volume and concentration of buckeyes in the schoolyard, I thought I’d do a little digging to learn more about the natural history of this cool critter. Here’s what I found:

A global perspective:
There are between 30-35 species of Junonia related butterflies (including buckeyes, pansies, commodores and leaf butterflies) in the world, and they live on every single continent but Antarctica. They all have very similar patterns including bars and eye spots, but their colors can vary widely from species to species. Research shows that the common buckeye (Junonia coenia) may have come into existence in the early Miocene, about 15-20 million years ago (the height of the mammals, and birth time of the Himalayas and the Rockies). This was a time in which the earth was in a period of extreme global warming.. In fact, the ocean flooded the land all the way inland to the fall line (Richmond) for much of the early Miocene.

If you get the itch to learn more about the evolutionary history of this family of butterflies (which includes several other Genus groups), you might begin here:

For a map of North America during the early Miocene:

http://jan.ucc.nau.edu/~rcb7/namNm15.jpg
For a description of the climate during the Miocene:
http://www.palaeos.com/Cenozoic/Miocene/Miocene.htm

The upper side of the wings is mostly brownish, and you’ll find two orange bars on each forewing. This butterfly has eight beautiful ‘eyespots’ on the top of the wings. The underside of the wings are brownish, and they can turn a rosy red in the fall. One of the easiest ways to get to know the buckeye from the distance is by observing its flittering flight pattern. The light colored band on each forewing is also readily noticeable from the distance, as it stands in contrast to the dominate brown colors.

Habitat:
I have seen this butterfly nearly everywhere this year, in habitats ranging from urban to rural, mountain to coastal, concrete to forests. Typically (I think this year was an extraordinary year for them) they are found at roadsides, railways and embankments, in fields and meadows, on shorelines and and swamp edges. In other words, they prefer open areas, human created or not.
Predators:
It is likely that many critters try to consume the caterpillar and adult butterfly. However, most of its host plants contain chemical toxins, which greatly increases the survival rate of the caterpillar. The adult has a somewhat startling behavior in the way it opens and closes its wings, and the eyespots serve as a startling mechanism. So, birds and predatory insects have probably contributed greatly to the evolution of this insect… thus we end up with a boldly patterned butterfly and a caterpillar that eats toxic plants. The less startling and toxin-free relatives of this species are extinct….lost in the distant evolutionary past, picked off by predators! But, there’s always a twist…and just as the buckeye has adapted to predator pressures, some predators just aren’t startled. The robber fly is known to be one of these (it also consumes spiders, yellow-jackets, and other animals with toxins)!

Food for the caterpillar

(host plants): The adult butterfly searches for specific plants to lay its eggs on. If it targets the wrong plants, the hatched caterpillars won’t have food. The caterpillars prefer plants of the snapdragon, plantain, and acanthus families. While these names might not be that familiar to you, most of them are local native wildflowers and weeds. In fact, If you wish to attract buckeye caterpillars consider planting the following plants, native to central Virginia and the larger middle-eastern states region: Butter and eggs, also known as Yellow toadflax (Linaria vulgaris); Largebracted plantain (Plantago aristata), Narrowleaf plantain (Plantago lanceolata), Blackseed plantain (Plantago rugelii), Virginia plantain (Plantago virginica), Carolina wild petunia (Ruellia caroliniensis), Pursh’s wild petunia (Ruellia purshiana)
If you ask for the native Plantains at the garden center, you might get laughed at….this is one of the more common weeds in your yard (and one of the targets of those aweful weed control fertilizers). The plantains are fairly aggressive, and seem to maintain themselves fairly well. You might go in the direction of planting less aggressive and more showy native species. My recommendations would be butter and eggs, which provides large and beautiful buttery yellow flowers, and Carolina wild petunia. The Carolina wild petunia is a wonderful wildflower for the garden, as it has a showy purple flower and is very drought tolerant.

Food for the butterfly (choice nectar plants):
A few of this butterfly’s favorite nectar sources are aster, chickory, tickseed sunflower, dogbane, mint and other local native species. You will also find them enjoying a variety of non-native species including showy varieties of stonecrop and budlea. They aren’t real picky, so this presents a wonderful opportunity to increase the color and diversity of your gardens….and, I would recommend highly all of the native plants listed above. They are beautiful, low-maintenance and support an extraordinary amount of wildlife.

Life history:
During the day the males like to sit on the ground or on really low vegetation to watch for females. This is a great time to observe them, as they will jump up periodically and chase other insects or to just snoop around. Females lay eggs on the underside of leaves of the host plants listed above.

Range:
The buckeye’s range is large, and it is a year round resident in the southern portions of the United States. The adults of the first generation each year move northward populating most of the United States and Southern Canada (with the exception of high elevation reaches of the Rockies). They migrate southward in thick droves in autumn. In the mid-Atlantic states you can see this butterfly from March to October.

One thought on “The Common Buckeye”