Recently I spent a couple of hours observing the stems of two trees: Shagbark Hickory (Carya ovata) and Pignut Hickory (Carya glabra). The result of time spent with these trees was a thorough exploration of the details of their stems, leaf buds, leaf scars and other minor details. Distinguishing between the two has become quite easy.
My tools for observation and inquiry were pencil, pen, paper, pocketknife, fingers, nose, eyes, and hand lens. Here are the steps I took that allowed me to first determine if they were in fact hickory trees, and second, distinguish them from one another:
I walked through the woods looking for young trees (so I could reach the limbs) and used only a few tests to confirm whether I had in hand a limb from the Juglanaceae Family, which includes walnuts, hickories, and pecans.
First, and after a quick glance, determine if the leaf buds are opposite or alternating. Hickories are always alternate in their leaf presentation (notice the alternate pattern in both stems in the drawing).
Second, I looked for heart-shaped leaf scars and light colored lenticels (see “Leaf Scar Variety” sketch below).
Leaf scars are the marks left when last year’s leaf drops off. In most deciduous trees, this leaves a mark just beneath new leaf buds.
Lenticels are tiny openings in the bark of the stem that allow for gas transfer (see the little spots on the stem in the drawing).
Third, and just for reassurance, I bend a branch…Hickories are particularly tough. They will not snap off, unless dead.
At this point, I know I have either a hickory, walnut, or pecan. Now to distinguish further. 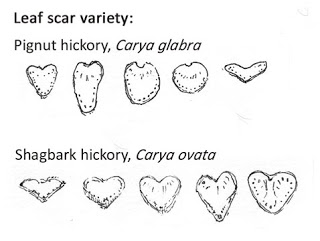 Learning more requires one to look a little closer. Attempting to replicate the stem in a drawing, and in a way the represents great detail, challenges me to look closer…and it does a great job of imprinting the experience upon my brain. So, the next step:
First, …look at the drawing of the stems…Are the lenticels round or elongated? (see close up of the stem drawing below) If they are elongated, the tree is a hickory. I ran into several trees that looked like hickory saplings to me, but they had round lenticels; which means they were walnut trees (curiously, walnut stems also have a pith that is in thin horizontal layers…pith is the different colored wood found at the very center of the stem.). 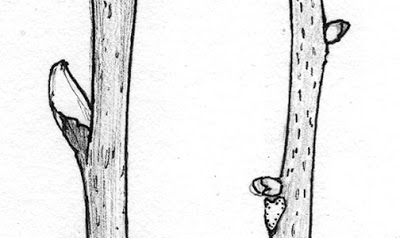 Second, and for reassurance only, I sliced the stem horizontally revealing a pentagon-shaped pith…an attribute that also distinguishes it from the walnut.
That is it. Having encountered several trees, I now knew which were hickories and which were not. It was my hope to find several different types, but alas, I only encountered two different varieties.
As already stated, one was Shagbark, one was Pignut.
Well, in this ecological province (Northern Piedmont) we have four regularly occurring native hickories: Shagbark, Pignut, Bitternut, and Mockernut. Occasionally, one finds a fifth, the Pecan (yes, a hickory), and most always it has been planted by human; placing it in or very near old and new human habitats.
The Pecan and the Mockernut have quite hairy twigs and the Bitternut has a very distinct terminal bud, being mustard-yellow in color and flattened. The Shagbark and Pignut have none of these attributes.
Based upon my observations, the following features distinguished the Shagbark and the Pignut hickories from one another (and you can see some of these attributes in the drawing):
Shagbark Hickory is different from Pignut Hickory in these ways:
With some time spent in close observation with these two stems, I have confidently identified the trees they came from…all without considering leaves, bark or nut (which can be very misleading…the least of which is the nut). Being able to make a quick ID allows me to spend more time considering the bigger picture…ecological mixes, interdependencies, co-adaptation, habitat, and connections. It adds to the richness of the story that hides in the woods. Patterns and behaviors in one part of nature are always connected to patterns and behaviors in another part…reading the landscape and the life on it requires a certain amount of decoding.
Understanding our place within the story requires an ability to recognize details and the relationships between them. Otherwise, we are assuming in our interpretation of things, and doing so based upon a puzzle made mostly of missing pieces. This is why species distinction and identification is oh so important for understanding.

4 thoughts on “A Comparison of Two Common Hickories”