Skip to content
I have to say the snow storm that blanketed the region in late December couldn’t have come at a better time. We were fortunate to enjoy a week and a half of vacation time together as a family just after the snow fell. The joys of being house and neighborhood bound for several days meant hours of tramping around in the snow laughing at little ones careening down steep, front yards, warming up to mugs of hot chocolate and laughing through games of Uno with our two young boys. When the roads finally cleared enough to venture out we found ourselves itching to stretch our legs and enjoy the white stuff on a local hiking trail. Thus our tracking adventures began on the snow-packed path around Ragged Mountain Reservoir.

We set off from the parking lot in a clockwise circuit around the reservoir. We immediately came across a meadow vole laying still on a snow embankment, a casualty of the deep snow and cold. As soon as we left the gravel road we noticed a network of various animal tracks ranging from tiny prints at the base of trees to distinct deer paths that crossed the main trail on their way to other parts of the woods. The snow depth ranged from about a foot to a fairly consistent six to eight inches. What a treat seeing all the animal activity that usually goes completely unnoticed in the mat of rotting leaves that typically covers the forest floor! 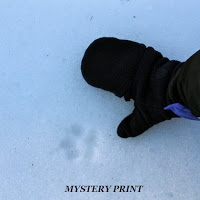 As we crunched along the trail we felt we successfully identified prints from raccoon, and rabbits. There were others that weren’t so easy to identify either because the snow melt had affected the track clarity or we simply didn’t know. One track in particular puzzled us. It was circular, close to two inches across, had four toe pad marks and no visible claw marks. This set of prints seemed to hold lightly to the trail, meandering off into the woods at various points. We were familiar enough with the basic difference between cat and dog tracks … dogs show claw marks and cats do not. Given this basic knowledge we felt were looking at cat prints. The stride length, size of prints and fairly remote location of the tracks from a house indicated this might be a larger cat … possibly a bobcat! 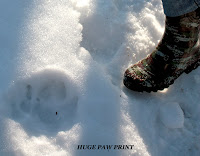 We continued our hike across the snow-covered berm that separates the upper and lower lakes. We continued to scan the snow along the trail for the cat tracks but found none on the other side of the lake. There were still the numerous raccoon and small critter prints, but nothing else that stood out till we had made our way about half way around the northern side of the lake. Enormous paw prints followed the trail in the same direction we were heading. From the look of the print we thought it was either a really big dog paw or maybe even a bear! The claw point marks were clear and there were four toe pads. After snapping several pictures we continued on our way figuring we’d start some tracking research at home to see if there really might be bobcat and bear around the reservoir.
That evening we began our research to verify which tracks we had seen. After viewing several tracking charts and reading through some websites, we figured that our original hunch about the rounded print might be a bobcat. Apparently bobcat and black bear may occasionally be found in the Ragged Mountain Natural Area according to the Department of Game and Inland Fisheries. We quickly disproved that the huge paw prints we found were bear. Our photos proved that the fifth toe mark always made by bear were absent. Whatever dog made those tracks must have been really large … the tracks were about seven inches across!
Several days later on the first of the year we returned to the trails with some good friends, Galen, Joanna and their boys, for another loop around the lake. The snow had melted a good bit and the many prints we had seen before were starting to blur and fade. We were pleasantly surprised to find the same mysterious paw prints running through the snow. This time we spent more time checking for further clues. One thing that stood out was these tracks occasionally ran along the tops of fallen logs. It seemed like our case for the bobcat was growing even stronger. A little further along the trail we found the tracks again running in a fairly straight line right over a rock. A slightly closer look revealed some scat that had been perfectly dropped on top of the rock! We were delighted to make such a find. The large amount of hair in the scat seemed to indicate this animal was a hunter … probably the bobcat we were imagining. 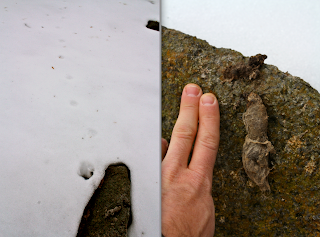 The rest of the hike around the lake didn’t yield any further clues about this particular animal. The tracks once again seemed to stop at the upper dam. We took in the beautiful snowy views of the lake as we finished our trek back to the cars. 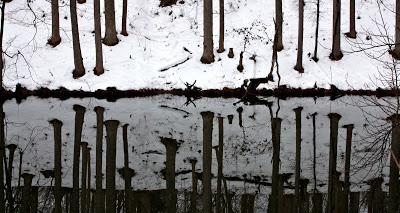 That evening we received an email from our friend, Devin, with some important information. We had sent him the photos of the paw prints after our first hike and hoped he could shed some light on the topic. After rotating the photo, enhancing the contrast and more detailed research, Devin was able to clarify an important difference between feline and canine prints that we had not discovered. Dog prints have a toe spacing that allows one to draw an X through the footprint without crossing through the heel or any toe pads. 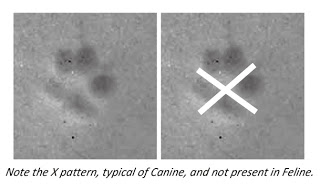 This critical discovery seemed to confirm we were on the trail of a canine … not the bobcat we had felt so certain about. We were still puzzled by the lack of claw marks and by the seemingly cat-like behavior of prints running along fallen logs. After still more research we finally discovered two more important facts. Gray foxes have semi-retractable claws which sometimes may not show in it’s tracks. Also, gray foxes are the only canines that can climb trees. Of any canine, it seemed the log-traveling behavior would be best matched to the gray fox.
Several weeks later after another snow had fallen our boys were at Play Group in the Woods at the Monticello Trail. Our son caught a glimpse of a fox running across Route 53 and into the woods on the other side. His description seemed to match that of a gray fox. We returned the next day to check the tracks to see if we could verify our hunch about the tracks we had seen at the Ragged Mountain Natural Area. Sure enough the muddy paw prints were exactly the same! It seemed our research had come full circle. Starting in the snowy woods near the lake, scanning websites and articles for information, contacting friends for advice and finally ending back out in the snow where we had a confirmed sighting. What an adventure!