Hamamelis Virginiana or common Witch-hazel usually blooms in November after the leaves have fallen from this shrub or small tree but this year numerous trees have been seen in bloom in Bundoran in mid October. The reason for this early blooming is not known. Witch-hazel is native from southern Quebec south to Georgia and west to just beyond the Mississippi River. Native Americans used its branches as dousing rods to locate underground water and to make bows. The term “ witch” probably derives from wych, an Anglo-Saxon term meaning bendable branches. The extract witch-hazel is distilled from the bark of young shoots and roots and used as an astringent or in lotions. 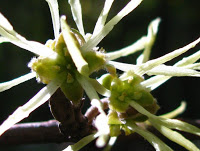 Witch-hazel flowers are yellow star-like with four petals and in small clusters along the ends of twigs. Botanists assume that the late blooming evolved to take advantage of bees and flies who are still active but have little to eat at this time of the year. Even though pollination occurs in late fall, fertilization of the ovules does not occur until the following spring, at which time the fruits begin to develop and remain on the shrub until that fall. The name Hamamelis means “ together” and “ fruit” referring to the presence of flowers and fruits on the plant at the same time. The capsules of the fruits split open explosively scattering the seeds far from the parent shrub. The capsules remain on the plant for months, making identification of the shrub easier.

The leaves of witch-hazel may be rolled into cylinders by the larvae of witch-hazel leaf-roller moth. They appear to do little harm to the plant. These larvae are small and difficult to see.

Native witch-hazel is grown as a landscape plant and makes a bright display of color of the leaves in the fall. Since it is native it is a part of our natural ecosystem, probably providing much more than food for late pollinators and the leaf-roller moth and for those animals that like the seeds.

For another account of Witch-hazel, and an opportunity to compare blooming times accross different eco-regions: Witch-hazel in Wildwood