For our first expedition, we all gathered near the trail head, sat in a circle, and discussed the purpose of the day: to explore, share, and to have fun! Everyone was challenged to find something new.
This first excitement packed expedition sent us launching into the woods. The group was spread out over about fifty yards for the majority of the expedition. Immediately the kids determined they must find an island, and hunt for pirate treasure. So, we moved quickly. We stopped occasionally for a closer look, and to ponder questions presented by the kids and adults alike.
This section of the Rivanna Trail meanders along Meadow Creek, so there were many opportunities to access the stream.
Discoveries and Inquiries: 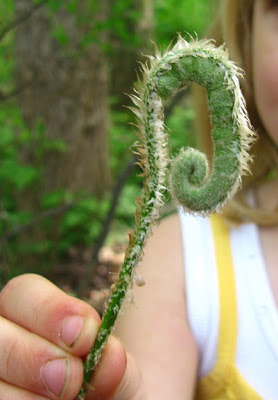 The edibility of fiddlehead ferns (which ones taste good anyway?). Upon heading into the woods we quickly encountered fiddleheads of Christmas fern and other varieties. Which ones are best to eat and when should this be attempted?
Well, once again the answer is “Be Careful”. Most of the ferns are safe to eat, though most don’t taste all that great. One fern, the Bracken Fern, contains thiaminase (which destroys Vit. B1) and has been linked to cancer. The most popular edible fiddlehead is the Otrich Fern. When it comes to creating a sustainable food source, the list grows to Pako Fern , High Climbing Fern , Swamp Fern ,Tree Fern and Cinnamon Fern. For instructions on collection and preparation, I recommend this site: WildHarvest 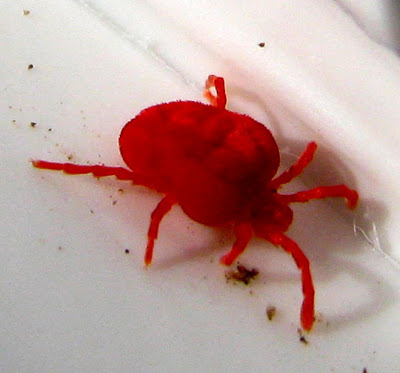 A Red Velvet Mite, Trombidium. As you now know, these little mites like to live in the woods. We’ve also seen them on sidewalks, on our house, and other localities. I read somewhere that when these are in larval form, they hitch rides on Grasshoppers…sucking their blood along the way!!!
The Siberian Elm. A blog contributor and local Naturalist wrote 2 great articles on this non native tree not to long ago. So, I’ll just direct you to there: LINK 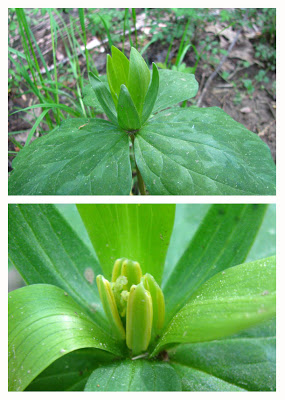 A rare and beautiful trillium was nestled along the edge of the Rivanna trail. We only saw one, but did not look around for long. There must be more in that locality, because if this one can grow where it was growing (almost in the trampled pathway) others should have no problem in the surrounding woods!
Garlic Mustard, Violets, and Fig Buttercup…we spent a little time comparing the leaves because of their similar heart-shaped appearance. This inquiry was partially driven by the fact that some of us like to include violet leaves in our salads…and would not want to make the mistake of picking fig buttercup (more accurately known as Lesser Celandine) instead. ….or would you!!??
Here’s a recipe that includes the Lesser Celandine (don’t eat leaves after April 15 +/- in our area): Lesser Celandine Stroganoff Recipe .
OK, well, what about that other nasty habitat killer….Garlic Mustard? According to the renouned Steve Brill (Wildman Steve) “..This despised invasive plant is actually one of the best and most nutritious common wild foods.”. So, here you go: Garlic Mustard info and recipes. Looks like we have another invasive species to add to our “If you can’t beat em’, eat” campaign!!

We found Trout Lily, and had a look at the root. Apparently this native wildflower was a staple in Native American diet. The freshly uprooted bulb can be peeled and eaten raw…it has a cucumber-like flavor. In fact, some sources say you can throw the whole plant in a salad! If you decide to do this, ensure you just taste one, as the beauty of this flower is just as enjoyable….and we want them to be there for generations to come. 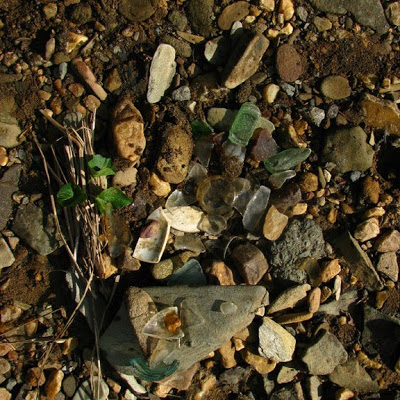 The variety of glass and ceramics are found in stream gravel in a city that’s been occupied by a culture obsessed with material goods for nearly 300 years ….is gonna be high! Purples, greens, blues, oranges, browns….and glass from all sorts of things ranging from early 18th century diamond window glass to yesterday’s coke bottle. You’ve got everything from chamber pot fragments (eeww, I know) to pricy china. It’s all in there. We can enjoy this beauty with some comfort. In the realm of polution, these materials are relatively neutral, so long as they aren’t in some wierd shape that kills a critter…or in a sharp fragment that cuts a child’s foot. Most of it came from kaolin clay and quartz (silica) sand, and it is returning to that source. If you happen to have old bottles or old glass and are wondering how old it might be, this site might be of use. Dating Bottles This is a resource for Historic Archaeologists everywhere!
We threw sticks in the water, and watched them float away…wondering why some get stuck and others do not. Would they float all the way down to the Rivanna River? …maybe into the James? Maybe on to a bay and Ocean?
We observed fish called Creek Chubs near their organized piles of submerged gravel…presumably a nest of sorts.
Tracks : We looked long and hard at dog and deer tracks in the mud. We wondered if any were Coyote, as they have been spotted nearby…and recently. Here’s an article: Daily Progress
Poison Ivy vs. Box Elder. We began exploring the distinguishing attributes of poison ivy when compared with the box elder. Telling the two apart can be tricky in early spring! And along streams aroun here there’s so much box elder and poison ivy that one can get doubly stressed!