On Tuesday, June 8th, The Albemarle Natural Heritage Committee was invited by Monticello for a unique opportunity to explore some areas of Monticello that are closed to the general public. Participants included: Lonnie Murray, Devin Floyd, Rochelle Garwood, Diana Foster, Chris Dumler, and Phil Stokes.

With Peggy Cornett, Curator of Plants, as our guide we set off to follow some old logging roads on the Mountain. Due the Catoctin greenstone that makes up this mountain, the soil (Davidson loam) was rich in minerals and alkaline evidenced by the diversity of flora and the presence of plants like prefer alkaline conditions. One of the plants that we hoped to find was Clematis ochroleuca which had been previously sighted by staff at a few locations on the mountain. This species would be quite unusual in that I’ve typically seen it more in sunny shale barrens, not Albemarle forests with clay soil. While due to the amount of undergrowth we were unable to locate this species, we did find other species that tend also to be found on sunny shale barrens including New Jersey Tea (Ceanothus americanus), and Southern Harebell (Campanula divaricata), and American Dittany (Cunila origanoides) which gets its name from the fragrance of the leaves. Otherwise, many of the plants were more indicative of cove hardwood forest, including Jack-in-the-Pulpit, Perfoliate Bellwort, Soloman’s Seal, Stinging Nettle, Black Cohosh, Wild Comfrey and a very extensive patch of Paw Paw (Asimona Triloba). The forests included some very large and impressive specimens of various species including large sugar maples, walnuts and tulip poplars. Also, Monticello’s continued implementation of Jefferson’s forest management has resulted in areas with very open forests. Other trees and shrubs sighted included green ash, white ash, pignut hickory, mockernut hickory, sassafrass, spicebush, dogwood, a catalpa. As dusk descended, birds sighted included neotropical migrants like scarlet tanager (an indicator of large contiguous forest patches), woodthrush, and red-eyed vireo. 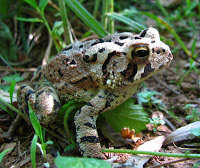 The only Amphibian sighted was a single specimen of Fowler’s toad (image to the right taken nearby, at Kemper Park), (which Devin and Diana kindly explained how to identify, the throat marking and numbers of worts per spot on the back, and the parotid glands touch the ridge line behind the eyes). Further down the mountain, Peggy pointed out a small colony of small yellow Ladies slipper (Cypripedium parviflorum var. parviflorum) that had bloomed previously in the season. This species too tends to be associated with organic soils high in calcium and approaching neutral. 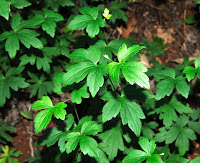 The most surprising find was another alkaline soil-loving plant, Southern Monkshood (Aconitum uncinatum), which Monticello had previously been unable to identify because staff had never seen it in bloom (probably due to its late bloom) I was able to identify this plant because I’ve seen it in the wild elsewhere and grow one in my garden acquired from the Wintergreen Nature Center, who sometimes offers it for sale. It is one of the few members of the buttercup family that is almost vining in habit. We also found an unidentified species of Euphorbia (evidenced by form and white latex exuded from leaves). In sunny areas on the way back, we saw a beautiful patch of black-eyed Susan.
-Lonnie Murray
Chairman, Albemarle Natural Heritage Committee