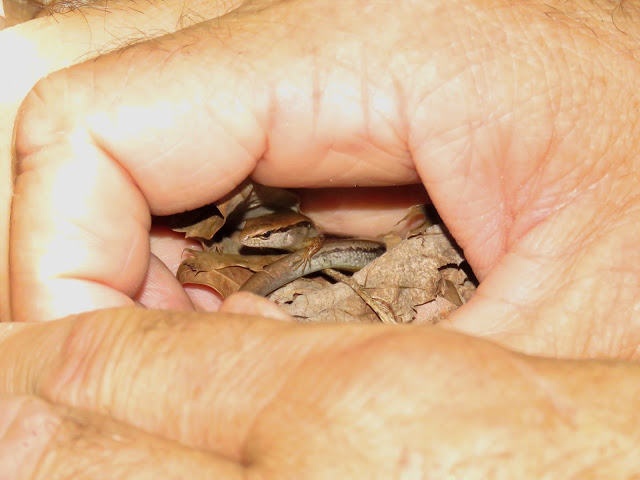 Scincella lateralis (little brown skink) VA: Albemarle County, The Hedgerow
Property (38° 0’37.39″N 78°34’47.57″W) June 13, 2017. Devin Floyd.
Significance of Record: County
First. While preforming biological survey transects at the site of the
future Albemarle County Park known as “Hedgerow”, I encountered Scincella lateralis on numerous
occasions. Dates observed were 05/02/2017, 05/09/2017, 05/30/2018, and
06/13/2017. I was able to finally photograph one at the south end of the
Hedgerow Property on 6/13/2017. It was captured and held for about 1 minute to
accomplish photo-documentation of head and body, and then released at the point
of capture. Three photographs were taken with a Cannon Powershot SX710HS
camera.
The individual Scincella lateralis reported here was observed hunting among the
leaf litter under a dense forest canopy, at the edge of a rock outcrop. Scincella lateralis individuals observed
during surveys on the Hedgerow Property during 2017 were most numerous, and
almost always found in association with, large flat rock outcrops. They were
particularly predictable at the upper margins of some of the area’s most
notable examples of the globally rare Piedmont Mafic Barren plant community
type. Here they enjoy the reliably dense combined ground cover of Brodesme rupestre (rock spike-moss) and Chielanthes lanosa (hairy lipfern). They
were often heard before seen, having scampered across the dry rock to make an
escape into a thicket of spike-moss and ferns. This disappearing act afforded
only split-second glimpses. They were also observed at rock outcrops on south
facing slopes in Basic Oak-Hickory Forests and upon the shallow, rocky soils of
Basic Woodlands and Heath Forest.
.