Exploring a Piedmont Basic-Mesic forest
Soils that rest upon Catoctin greenstone (meta-basalt) substrate are generally known as “basic” soils. This word “Basic” is a confusing term!! I recently learned that it refers not only to the pH of the soil, but also to the soil’s ability to hold nutrients!
Quoting the DCR: ” The term “basic,” as applied by DCR-DNH ecologists, refers high levels of base cation saturation rather than to soil pH, which analysis has proven to be a less reliable indicator of fertility and parent material. ” This is a very important distinction, and in my mind it shifts priority away from predicting flora based on pH to relying more on understand geology, soil drainage regimes, aspect, and other factors. 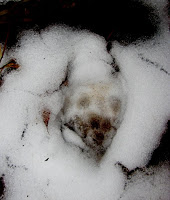 Walking yesterday on Carter’s Mountain (on the mountain trail) I was able to take in broad spans of landscape. The trees were leaf-less, and the ground was covered with snow. On this walk I paid attention to two things: tracks in the snow and percentages of tree species.
Mammal tracks were everywhere. Inspired by the recent bobcat sighting, my primary mission was to find bobcat tracks. This took me off-trail several times, as I followed paths that led to thickets, downed trees and rock outcrops. With some patience I found one locality where two muddy-pawed bobcats passed by. Their path sort of zig-zagged down the length of a log, showing that they crossed over it several times. Other tracks present were rabbit, squirrel, fox, and domestic dog. It was a complex scene! The tracks I followed suggested that two cats passed through, and more recently than the other animals. I also noticed that one of the bobcats is much smaller than the other. Notice in the photograph the small track inside of the big one.

After exhausting myself chasing bobcats, I shifted focus to the trees, and worked my way back to the trail. My intent was to practice recognizing changes in the forest mix, and begin to formulate hypotheses about why this is happening. The thing is, in the winter woods, changes can happen without any noticeable (to the layman) change in pattern. For example, it’s really difficult to pick up on hickories changing in percentage from 25% to 10%, especially when more than ten other species are present and changing as well!

So, I zipped, slipped, and slid along the trail trying to keep my head upright and eyes in peripheral view mode. I was looking for anomalies, or indicators of change. I looked for places where the aspect shifted, the slope changed, and where the ground become more or less covered with boulders and outcrops. I was scanning for changes in the bark of the lower trunks of trees, variation in upper tree structure….alternate or opposite arrangement of stems, thick and straight, thin or wiry.

Upon rounding a corner and shifting to a north facing cove, a significant change occurred; but exactly what that meant, I did not know. I continued on and stopped at a point where the obvious shift had reached its maximum. In order to understand what type of change had occurred, I needed to count. I counted all species of trees that could be reasonably spotted from my viewing point(with the naked eye), using some larger trees as “corners” to a semi-rectilinear survey area.

Ahead along the trail there was a bend, and a very clear change in forest mix. From my view I could tell that the ash and spicebush were nearly absent. So forward I marched. Within less than 50 years the landscape had changed. The most obvious change was a shift from North-facing slope to West-facing. A less obvious change was in what might be a shift in soil drainage, from semi-poorly drained (mesic-hydric) to well-drained (mesic). I figured a look at the new forest mix would shed light on these matters. So, again, I stopped and counted, using the same standards as before (which has a certain rate of error…I was eye-balling, and I could not ID one species…might be linden, and there were only a couple).

A few observations: Note that, in a very short distance (fifty yards), with a shift in aspect and soil drainage, the following occurred.

Conclusions:
Abrupt and significant changes in forest mixes can happen over short distances, even when elevation and substrate are consistent. The aspect shifted 90 degrees, from North to West. While this was an important factor, my guess is that soil drainage regime was the primary force in determining both content and potential for tree diversity at this site. It is clear that the deeper alluvium/colluvium and the presence of an ephemeral stream and possible seasonal seeps had an impact. This spot probably gets run-off from the road and fields on the mountain-top, and this likely brings great volumes of water to the locality. Given that I was observing flora, it is likely that, in the warmer months of the year, the life in the ground cover (herbs, bryophytes, fungi, etc.) might express the diversity/content determining factors in a similar manner.