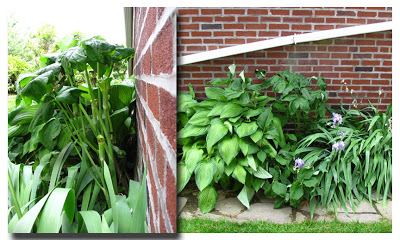 Twelve years ago a few Jack-in-the-pulpits (Arisaema triphyllum) were transplanted from a Central Virginia forest to a tiny garden in a Philadelphia suburb. My memories of that C. Virginia forest are engraved upon my brain. There were acres of Jacks standing among scattered and gnarled heaps of weathered horse bones. It was in this ancient and mysterious woods that I dared place a bit of freshly sliced Jack-in-the-pulpit root upon my tongue. “The Indians used to eat it”, earning it the nickname “Indian Turnip” …this made it a cool thing to try.
The oxalate crystals exploded in my mouth…a feeling that is best described as coating your mouth and throat with a concoction of needles, bees, and fire. Eating wild native plants is rarely as simple as one hopes, or as immediately gratifying and nourishing as the lore may suggest. My memories of planting those Jacks in West Philly aren’t as painfully potent. My future wife and I plucked cobbles of garnet schist and gneiss from Cobbs Creek …stacked them into a small garden retainer. The Jacks went in. And then…ZZZZIP….twelve years went by.
This weekend I was reunited with the Jack-in-the-pulpits. To my surprise, delight, and utter amazement, the colony was strong. But, something was different, extremely different. These plants were goliaths. They towered above the giant hostas and irises beside them. These are, by far, the largest native jack-in-the-pulpits I have ever witnessed.
Measurements:
Plant height: 36″-40″
Spathe height: 5″- 6″
Each Leaflet: 10″ -11″

Surely fertilizer was the culprit (and lots of it). What other conditions would give rise to such massive plants? As it turns out, no care (or fertilizer) has been given to this little garden since the jack-in-the-pulpits were planted twelve years ago. It appears that several factors played a role in creating gigantic plants.
First, the location is protected from high winds but still has access to some filtered sunlight. The garden is tucked along a lesser-traveled walkway on the northwest side of a house.
Second, it grows in a deep, acidic, well-watered, well-drained topsoil …and it has very little competition. A leaky downspout gives it plenty of water, despite it being right up against the house. The dense shade seems to have aided in keeping competing plants away.
The combination of protection, good soil, and general habitat stability has given these plants a perfect place to grow.
Have a look at the images to the right. What you may have thought was the flower is not. Those green spheres with the tiny white fluffy tips are the flowers. 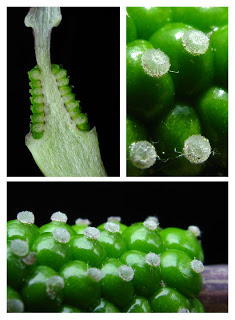 The large striped spathe we enjoy is actually just a protective sheath! Another little known quality of this plant is that it changes its gender if given a stable and fertile enough environment. Plants begin their lives as males, producing pollen. After about 4-6 years the spadix (the jack) will begin to produce female flowers. It is then that seeds may be produced!
This suburban garden had been all but ignored for over ten years…just the treatment a native plant enjoys! Suburbia… a lust for exotic plants, a desire to completely rid of insects and other animals, a constant and pricey attempt to make lawns look like putting greens… none of it bodes well for native plants, or the biodiversity and general ecological stability they can support (most beautiful hardy wildflowers are simply dubbed “weeds”). 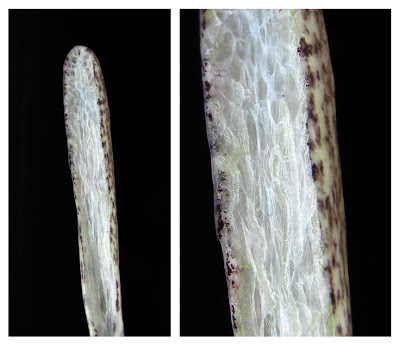 The jack-in-the-pulpits are a good example of how enjoyable and low maintenance native plant gardening can be! Just don’t nibble!

Information about the dangers of Jack in the pulpit Poisoning

One thought on “Giant Jacks in the Northern Piedmont”