Skip to content
Here’s a photo of a Horse-chestnut panicle, which was spectacular in so many ways. The tree stands at the corner of High St. and Locust Ave., in front of Martha Jefferson Hospital. 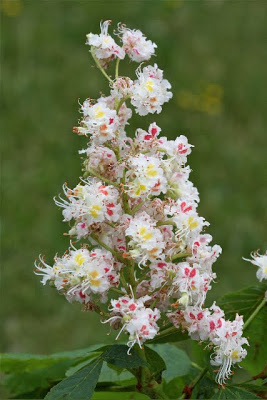 Horse-chestnut flowers are sometimes described as being white with a small red spot, but in fact the spots on a single panicle range from from yellow to orange to pink to red–a real carnival! And the scent is wonderful. I kept carrying the flowers around and showing them to people, who would catch a hint of the scent and then bury their noses in the cluster, emerging with smiles of delight. They’re primarily pollinated by the early-flying bumblebees. It’s interesting to me that the tree is a buckeye, in the same genus as the familiar Yellow Buckeye, Ohio Buckeye, and Red Buckeye, but the common name tends to mask the relationship. It is as familiar to us as the native buckeyes I listed, but in fact it’s originally from a relatively small region of the Balkans, was introduced all over the temperate world, and has now naturalized in the United States. It is a good example to illustrate the idea that not all introduced alien species become invasive. Only a small percentage do, but they get an enormous amount of press!
-Tony Russell

One thought on “The Horse-chestnut”