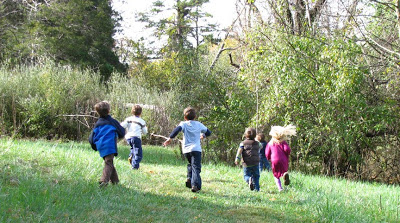 Blue Ridge Discovery Center hosted a very casual fruit picking event at Kemper Park just south of Charlottesville, Va..
17 adults and children marched off into the woods in search of the meadow of fruit. Our target was a late fruiting shrub known as Elaeangus umbellata, or more commonly, Autumn Olive. You can see where it gets its name, as it makes pea sized succulent red fruit late in the season. Most of you know by now that this shrub is a primary target for eradication, as it is a non-native invasive species that degrades native habitats.

The focal point of this gathering was picking berries. The conversations that took place while children ran, picked, ate and played were focused on the dichotomy this shrub presents. It is a very nutritious and abundant food source, and the berries are easy to harvest and process. But, a variety of non-human animals like it also. They eat the berries, it passes through their guts, and the seeds are dropped ready to germinate. This nitrogen fixing shrub has spread like wildfire since it was introduced to the United States in the mid 1800’s.

Why is this a problem? Well, on the face of it the shrub appears to provide abundant food and excellent shelter for a variety of wildlife. Short-term, this is excellent, and I imagine that some sort of food-web spike happened upon its introduction. But, as animals begin to rely upon it they rely less upon what was likely a more diverse autumn diet of native plants. So, all of the sudden native species that grow in poor soils and that produce late autumn fruit and seeds saw a fierce competitor…competition for space, and competition for seed spreading mechanisms. One conclusion here might be that while their might have been a spike in numbers and diversity of wildlife at the onset (over a hundred years ago), there is now probably a sharp decline in biodiversity that is associated with this Asian shrub.

Solutions? There aren’t any, really. The Virginia Department of Conservation and Recreation has recommendations for how to manage this invasive species: LINK (PDF). It is quite possible that this shrub is just too aggressive to actually manage on a broad scale, and this has been demonstrated. So, efforts to keep it at bay are undertaken on the small scale, in bits and pieces. This is an uphill battle also, because the shrub returns as soon as one lets their guard down.

Consider this: Picking berries as a conservation effort? When one removes berries from a shrub, this has impact on the availability of the fruit. As one BRDC staff puts it, it is about percentages. Less fruit available means an overall reduction in the number of new shrubs. The problem is, it actually appears that wildlife cannot even keep up with the fruit production. Every year droops of berries fall to the ground and rot after a heavy freeze. I would guess that the majority does not even get eaten by animals larger than say, a vole. So, while we can remove a good portion of berries from the shrub, the amount still available will still easily feed the animals that currently utilize the shrub, which means that picking the berries is not a meaningful way of managing autumn olive shrub populations. Oh well. Bring your best argument for or against.

Delicious and nutritious. The fresh fruit has a sweet tart kick (think cranberry with more sugar). There is a bit of bitterness in the aftertaste that is mellowed by the sugar of the next bite. When processed, however, the fruit immediately looses its bitterness and becomes a super sweet treat.
USDA is experimenting with this shrub in order to test it as a sustainable food crop in the United States (a sterile genetic strain, I presume). Remember, it can grow anywhere…poor and degraded agricultural soils included. It needs very little water and no fertilizer. It can grow in soils that no longer have the ability support other crops.

Why might they be experimenting with this? Well, ….here:
Nutrition:

Serving size: 100g(1/2 cup) Calories196
Protein: 3 grams
Vitamin A : varying amounts from shrub to shrub
Vitamin C: 9 mg
Lycopene: The berries contain the same carotenoids as tomato: lycopene, beta-carotene and lutein. The big difference is in the lycopene levels. They range from 15 to 54mg per 100g, compared to an average 3mg/100g for fresh tomatoes, 10mg/100g for canned tomatoes, and 30mg/100g for tomato paste.
If you would like to give it shot, here are some recipes we have compiled. You may disregard the addition of sweetener in the fruit roll-ups…..the fruit truly stands on its own! RECIPES (PDF) 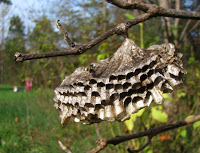 So, we picked…and picked some more. I’d guess that a total of 5 gallons of berries were harvested in about two hours. And this does not include the gallon or so that was eaten while picking! We are making fruit leather, jam, and eating them by the hands-full. And while we are out there picking, we encountered all sorts of extraordinary things, like a gigantic catalpa tree, a beautifully positioned wasp nest, lots of praying mantis egg cases and crab spiders on the autumn olive shrubs….to name a few. And sometimes, when you are engaged in one thing, other things are discovered. Actually, this is the common occurrence in the outdoors…the standard that we all love. 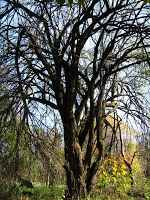 Upon our walk back to the parking area the kids discovered a lovely little island of old field trees with grape vine swings and a canopy of poison ivy berries (yikes, I know). In that island were a couple of really old trees, a dogwood and a strange old “fruit tree”. As the kids played, a couple of us were pulled closer to this old tree. When we got closer, we realized we had something special… and it’s not a standard “fruit tree” like crab apple or cherry. It’s leaf arrangement and end buds made us think it was a viburnum. And then we saw the fruit…small oval black droops. And so the inquiry is on. Could this be a Black Haw? If so, that would be quite a discovery! Stay tuned for more on this amazing tree. 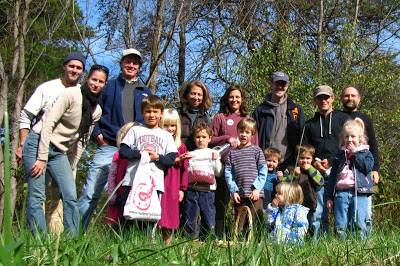 BRDC and its followers have been harvesting and sharing the autumn olive fruit for over a year now. Here are some articles reviewing past pickings and sharings: