“Ladybug”, “Lady beetle”, “Ladybird”.  These are just a few of the names associated with the familiar small, round, and red insect with black spots.  While doing some research on their lifecycle, I discovered these well-known and well-loved insects also have a rich history and folklore.  Instead of entomology, I was quickly being drawn into etymology and the study of names.  While “ladybug” is most commonly used in North America, “lady beetle” is often preferred by entomologists since ladybugs are in fact beetles in the order Coleoptera (not true bugs in the order Hemiptera).  In Britain and elsewhere, “ladybird” is typically used with “lady cow” being an older variant.  The “lady” part of the name is a reference to the Virgin Mary who was often depicted in paintings wearing a red cloak. While many European languages have similar names which incorporate “lady”, “Mary”, or “God” into the common names, there are also a wide variety of other common names.  When literally translated, you find everything from “golden wings” (Hindi) to “tiny shoemaker” (Persian) to “gold hen” (Swedish) to “insect of fortune” (Turkish) with cow, hen, and gold appearing frequently. Lady beetles are also often seen as a source of good fortune or a predictor of the future. 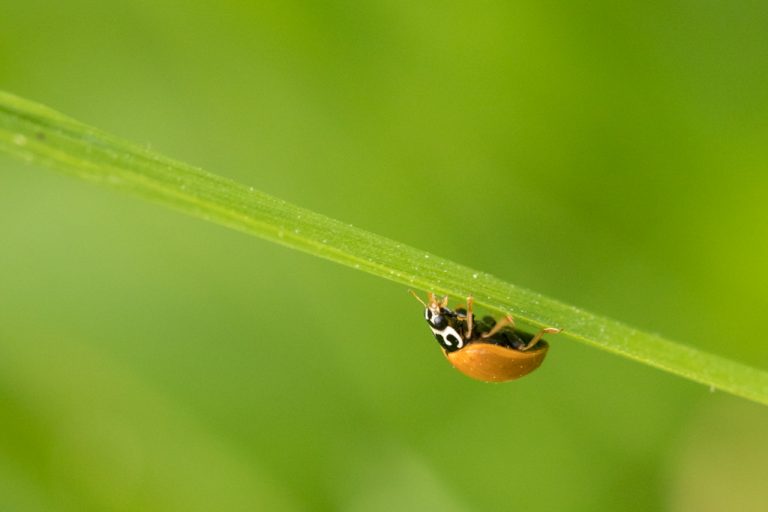 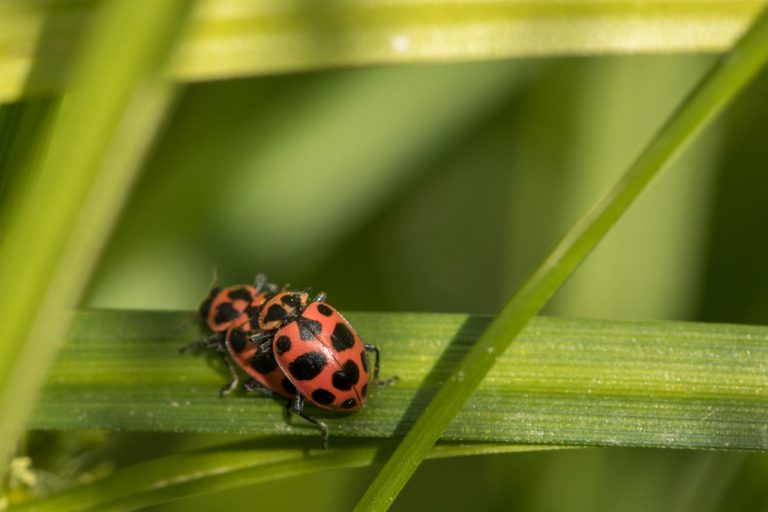 Lady beetles are in the family Coccinellidae, a name based on the Latin word coccineus, meaning “scarlet”.  Many species eat aphids or other plant pests and are therefore well-loved by gardeners and used as biological control agents in agriculture.  Some species such as Coccinella septempunctata (seven-spotted ladybird from Europe) and Harmonia axyridis (multicolored Asian lady beetle) have been introduced in North America as biological control agents.  The latter are perhaps best known to many as the pests that invade their homes when these lady beetles seek a place to overwinter.  While there are about 480 species in North America, I most often see 4 lady beetles, the two aforementioned non-natives, and two natives – Cycloneda munda (polished lady beetle) and Coleomegilla maculata lengi (spotted lady beetle). 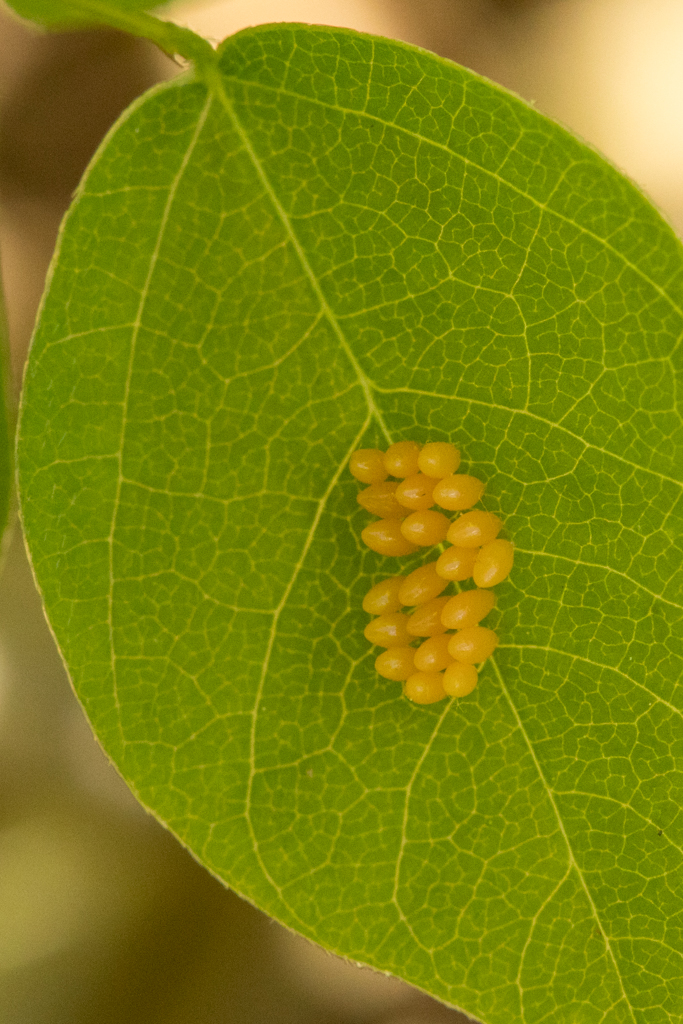 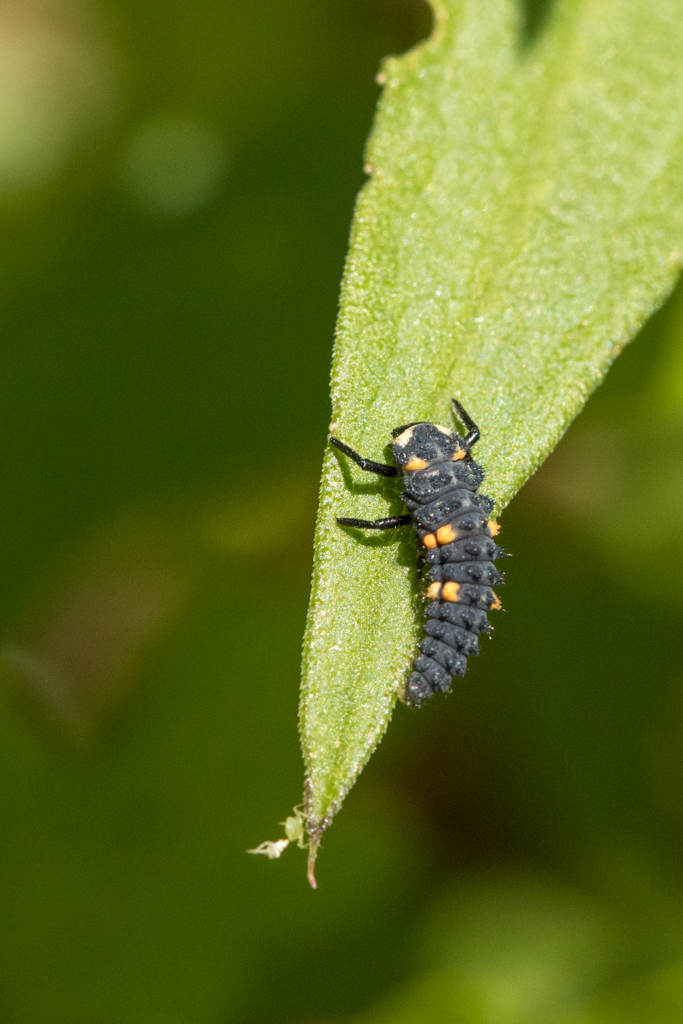 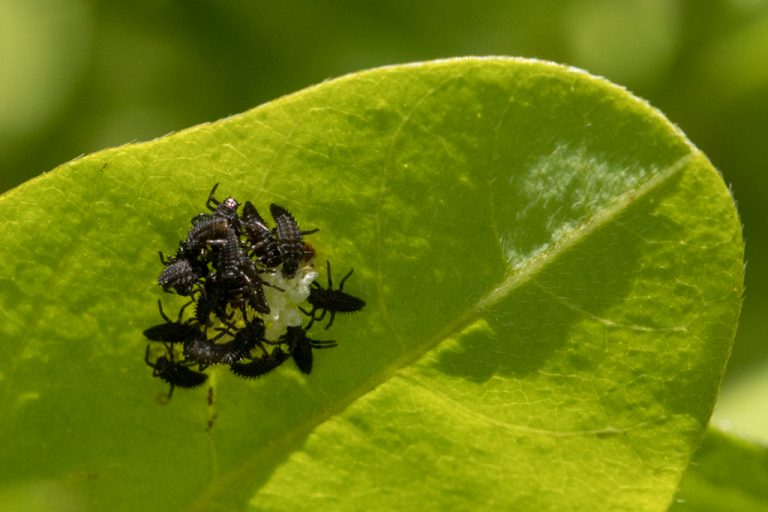 On recent CUH surveys, I have had the opportunity to observe lady beetles in all stages of their life cycle.  They begin as eggs, often attached on the underside of a leaf, which hatch in about 2-10 days. From the eggs emerge the first larval instar of the lady beetle. These larva are voracious predators – primarily of aphids and other small insects – and will grow and molt 4 times over the course of about 3-4 weeks.  The transformation to an adult lady beetle occurs when the last larval instar attaches itself to a leaf to pupate. The life of the adult lady beetle begins when it emerges from the pupa.  Like the larva, the adults often eat aphids or small insects, although a few species eat plants or fungus. When fully mature, they will begin the cycle again by mating.  Lady beetles live in many habitats and all the stages of their life cycle can often be seen within a small radius.  Try finding their eggs, larva, and pupa the next time you spot a lady beetle! 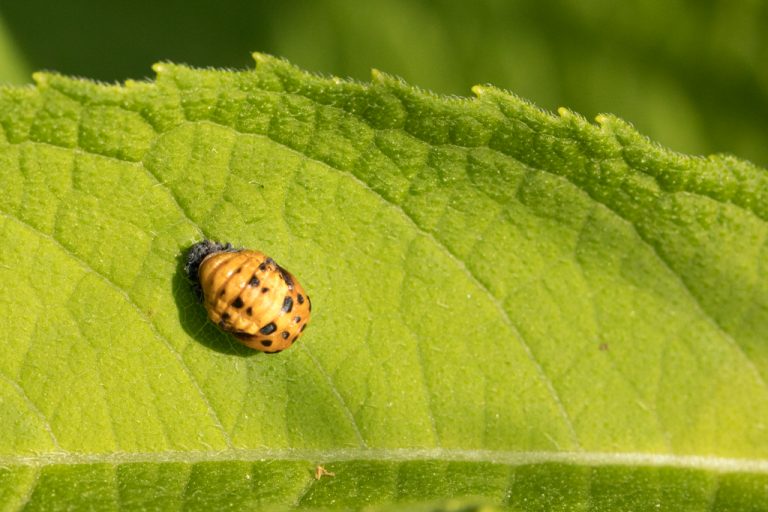 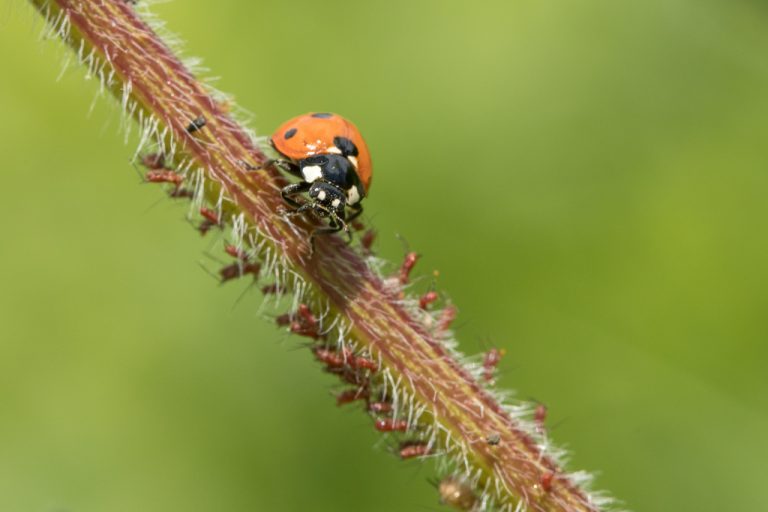