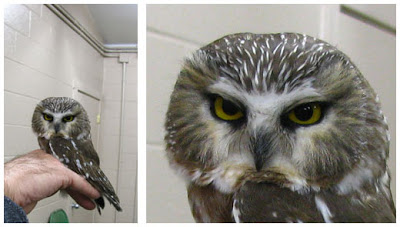 On Friday November 20, my family joined Clair Mellinger (fella with the hat on) and Charles Ziegenfus for some Saw-whet owl (Aegolius acadicus) banding.

We are lucky these guys make their efforts open to the public, and were fortunate to have Clyde Kessler bring this annual event to our attention. A snippet from a correspondence from Clair, “Visitors are always welcome at our station. No age limits. We see it as a great chance for biological and ecological education. As Scott Weidensaul says, the cuteness factor of these birds is quite high. We will be banding the next two weeks (at least) on every night, weather permitting. We define bad weather as precipitation or high winds. It is good to check with us before coming, especially if you who are coming from a distance, because there are a few other times when neither of us can be at the station.”
The banding station is near Broadway, north of Harrisonburg (Google Map). The Banding operation happens during the peak of Saw-whet Owl migration, November and December. Even though most of Virginia and the larger southeast has no year-round populations, there may be exceptions. This is part of what is being learned through this banding effort… when and where the animals move. A mating and year round population of Saw-whets has been observed in this part of Northwest Virginia, being at the southern tip of a Northern range. You will notice on the range map (from owling.com) that there exists documentation of permanent populations in the Southern 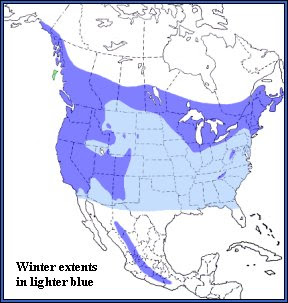 Blue Ridge as well. There are 13 banding stations scattered about Virginia (most not open to the public) and peak owl catching happens during the first three weeks of November… a note for next year’s trip (s)!
Summary of the evening:
We arrived at around 6:30 pm in total darkness. We could see light coming from the tabernacle and could hear the distinct sounds of an owl call being played repeatedly upon a ridge top. After meeting and greeting, and some chit chat and discussions about what to expect, we armed ourselves with headlamps and flashlights and marched off into the darkness, with Clair leading the way. We could hear the roar of a swollen stream and soon found ourselves crossing it.

We then trekked up a soggy and round-about trail to reach a knoll. The hills are quite steep in this part of the Valley and Ridge, a phenomenon created by alternating bands of very soft and very resistant bedrock. This ridge is held up by a hard sandstone, and drops quite steeply on the west side into the creek. We walked for about a half mile through mixed forests, by a pond, and eventually to the net site. The playback owl call was piercing the night. The mist nets were stretched along the length of the ridge. We were among a mix of Hemlock, Oak and Pine…a dense forest indeed, though quite exposed to the elements up on the ridge. Clair said the owls enjoy dense evergreen foliage of pine and hemlock as a staging or watching post.

From down in the lower reaches these tiny owls scan the ground for prey.
The night was so silent, it was hard to imagine anything being out there…and then there it was, soft and fluffy, lodged in the net! Clair removed it with care, placed it in a cloth bag and handed it to us. On our way back down the trail, we rechecked a net we had just visited. An owl had silently swooped in, like a ghost out of thin air! So, we had two of these fuzzy little hunters, in bags, with talons piercing through. On the return we descended the steep side of the sandstone ridge (made easier by a knotted rope connected to a tree). Eva and Norah, 3 and 4 years old, were delighted to be carrying owls out of the woods. 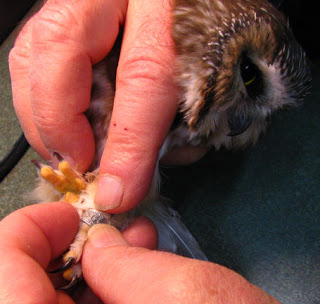 We took them into the well-lit banding room, and watched as Clair and Charles took measurements, made notes, etc. We held the owls for most of that time!
Two really interesting things we learned were about the owl’s ears and feathers. The ears are located asymmetrically on the head. The left ear is near the lower part of the head and the right is way up high. This allows the owl to triangulate both horizontally and vertically at the same time, making it a fierce predator…and a feat of hearing that humans cannot accomplish.

Notice how easy it is to find something on the horizontal plane using your hearing, and how difficult it is to determine how high up something is. Our ears are aligned horizontally. We looked at the feathers of the owl under a black light and the newer the feathers are, the more they glow red (see video)! In fact, all areas that are shaded from direct sunlight retain more of this pigment as well. This coloration is used to determine how old the owl is.
After measurements and observations, and much discussion, we took the owls outside for release. They stood on the picnic table in front of us for a bit while their eyes adjusted, and eventually flew back into the night. 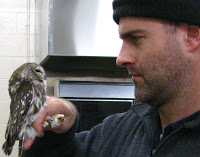 So, we had a wonderful evening. On the return home we contemplated the mysteries of night. It really shed light on the well-known fact that we only see a tiny percentage of what’s out there. Nearly all large animals in the east are nocturnal! This encounter with such a delicate creature of the night also placed an emphasis in my mind upon delicate interdependencies, habitat requirements, and the neccesity for well-balanced ecosystems for the health of us all. For without this balance, diversity and stability cannot exist.

The deforestation of North America nearly a century ago contributed to an economic boom and rapid societal growth. These actions were done with a short vision, and the payoff was only temporary. This activity produced such rapid change that recovery towards stability and ecosystem balance will be going on for a very long time. Millions of lifeways were severed and species ranges were either eleminated or fragmented. I imagine the Saw-whet has been reclaiming some of its prior domain as our forests return! 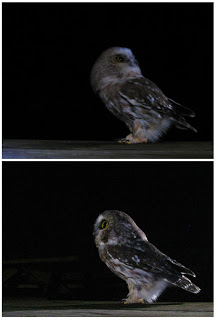 Our imaginations are still on high, and we look forward to next year’s visit to the banding station. Hopefully we can plan further in advance so that multiple visits can be made, and so that more people can join us!
Thank you Clair and Charles! 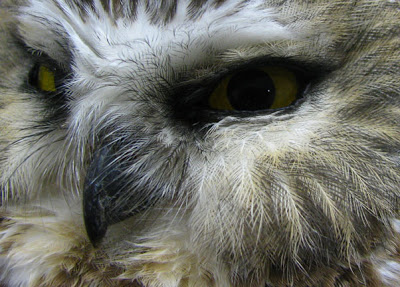 For more detailed information about the Saw-whet owl visit this website: The Owl Pages