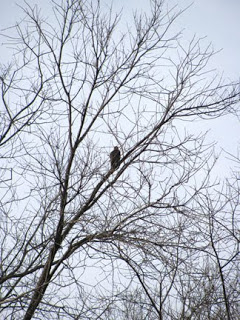 Another chapter in the ecology of Belmont Bridge.
It was only a few cold days ago that I spotted an animal as I drove across that bridge. Its unusual posture could be seen in silhouette in the shadows of a large tree on the North side of the Beck Cohen building. We see lots of turkey vultures and black vultures around town, sometimes gathering in great numbers to rest in the large oak and poplar trees. And one sees with nearly every treeward glance a solitary crow pulling a view from a treetop…chatting with his brothers and sisters across the way. But, this silhouette was different. It wasn’t crow sized, it wasn’t massive like the vulture, and its proportions were wholly unique. It must be an Accipiter.
I could see a long tail hanging down, well below the point at which its folded wing tips met upon its lower back. This must be a stealthy hunter….short wings for speed, long tail for maneuvering. Those other birds, the Red-tailed hawk, the Red-shouldered, the vultures…they are built for soaring with those long broad wings and fanned tails. But this bird, it could probably dodge trees and limbs, dive into thickets with deadly accuracy, and maneuver quickly around the dangers of a motorized city. This is a woodland hunter, adapted to the narrow passes, perches, and lurking shadows of the forest….and of the city. It stood there proudly, upright, body firm, head pivoting upon a point, tilting with twitches in response to things passing by. The bird was no more than 15 inches tall. Most likely an Accipiter…maybe a Cooper’s Hawk? 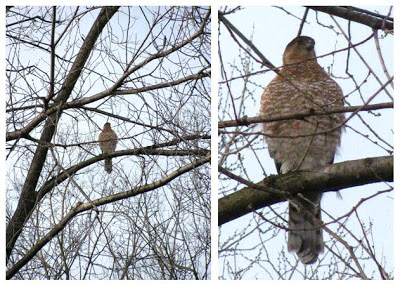 So, I made a sharp right turn and found a parking spot below the bridge. I lurked in the shadows, watching the hunter lurking in the shadows. As I got closer I could see its light colored chest, the small bars of rusty orange, and the large bands of dark gray on a light gray tail. It appeared to have a cap on its head…some darker colored feathers up there, similar to the dark gray of the bands in the tail. As I got closer, and eventually directly under the bird, its oversized talons, its glaring orange-yellow eyes, and its small but sharp beak gave it quite an appearance….its intentions and its purpose were clear. I think this is probably a Cooper’s Hawk, Accipiter cooperii! 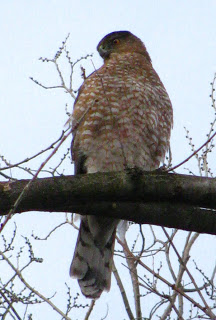 I watched this bird from behind a tree about 25 yards away. This bird had clearly caught the attention of the other animals nearby, those that could become its breakfast, and those that were just plain curious like me, the oddly garbed Homo sapiens lurking in the shadows. And yes, there were a few people watching me watch the Accipiter, and wondering who I was spying on with those binoculars and camera aimed at the Beck Cohen building. The Pigeons, which one could count on seeing perched on the wires of Belmont Bridge at this time every single day, were missing. 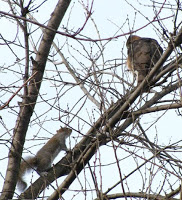 They had moved to their mid-day perch, a safe distance, atop the pavilion. And of course, the squirrels were not happy about the presence of the hunter. One brave squirrel climbed the limb to taunt the hawk, getting within a foot of the bird…only to be swiftly brushed away by a flap of the wings and a swipe of the talons. It tried to persuade the hunter to leave for about five minutes, and gave up. Birds, flocks and solitary, made an arc as they passed the site of the hunter, avoiding its clutch. The mighty Cooper’s Hawk.
This bird was patient. It sat still, in the shadow of the Beck Cohen building, and as the sun rose a bit higher the other animals went about their business. The hawk seemed to fade and fade as the brightness of daylight became sharper against the shadows. The hunter was now completely veiled, and it shifted its position a bit. It was preparing, and I could now see why. 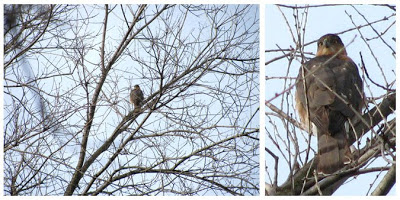 There are a few bird feeders on the East side of the small pet service office building next to Beck Cohen, and currently a large group of sparrows and a few finches were getting their fill. I moved my position closer to the feeders, and quickly realized that the hawk was perched at an elevation just high enough to allow it to see over the building to the feeders, and that it was watching back over its shoulder, with the dark gray plumage directed toward the feeding birds. The hawk was very difficult to see from there. The sparrows probably had no idea the hawk was there. I waited and waited…and waited, and just when I thought I might leave, it happened.
The Cooper’s Hawk dropped from its perch like a bomb. It disappeared behind the building, racing horizontally at about eight feet above the ground, like a torpedo completely hidden from the sight of the songbirds. It approached the feeders completely out of view from behind the building, covering the 20 yards or so in a split second. Upon reaching the back of the small building it “jumped” the building, scaled it nearly skimming the roofline and dropped to the feeders in a complete surprise attack. This is apparently a common tactic for Cooper’s Hawks, “to fly fast and low to the ground, then up and over an obstruction to surprise prey on the other side”*. 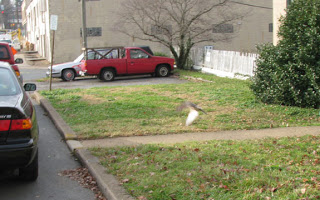 The sparrows immediately plunged into a nearby holly hedge…the hunter missed with its first swipe. It made a very short circle (see the blur in the photo, right-center)and turned its sights on that holly hedge, diving again this time with its wings tucked, …headlong it went into the prickly thicket. The bushes shook for a few seconds and, interestingly, no sparrows emerged…I guess they prefer the cover of the evergreen to flying out into the open, even in close proximity to the predator.
After about a minute the Cooper’s hawk emerged landing on the ground briefly and flew away. It did not have a bird in its grasp, but I noticed its chest was covered with blood…could it have eaten its prey in the shrub?…that quickly? Or maybe it gave up, the thicket being a bit too much to maneuver through.
I followed the Cooper’s Hawk as it flew away and found it in a young Sycamore tree nearby…again concealed and carefully watching. It had just given significant effort to taking a small amount of food, a bit unusual given the plentiful urban palette of larger prey like Pigeon, Starling and Squirrel. It’s likely that the small size of this hunter (probably a male) combined with the density of the sparrows at those feeders make this an advantageous food source.

In the face of our assumptions of what it means to be “city”, it is humbling to see the resilience of the plants and animals here. There are entire communities of life here, dwelling among the concrete, the wires, and the machines…and dare I say that it is also very diverse, containing hearty native species and well-adapted non-native invasive and exotic species. The flexibility of Nature’s web allows cities to reside within it comfortably. Despite our mislead tendency to view humans and cities not being a product of nature, we, and everything we do, are inseparable components of the story that plays out in Nature’s book. This city is an ecosystem, a habitat. It is our habitat and the habitat of the Cooper’s Hawk, and a home for millions of other plants and animals. With an ecological perspective of human existence, and with some effort to look closer, one discovers the reality that all behaviors and actions have ramifications in this world of deep interdependency. This delicate balance exists as much in our city wilderness as it does in the forested wilderness.

So, the next time you pass through the Belmont Bridge ecosystem, consider giving a glance to the shadows on the North side of the Beck Cohen building. There one may catch a glimpse of the hunter, and ponder the ramifications of interdependency and co-existence. 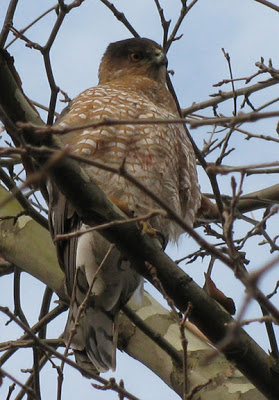 One thought on “A Master of the Hunt”