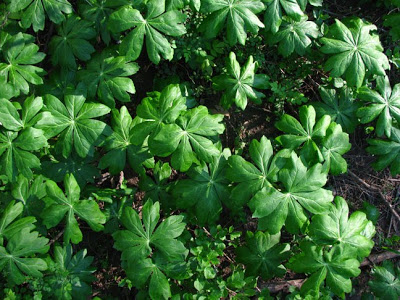 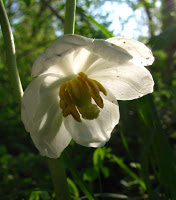 Description: May Apple grows to about 12-16 inches high. The stem separates into two large, dark green leaves after a couple of years. Interestingly, the leaves can have from 4 to 9 or more lobes. The leaves look like umbrellas and protect the large white flower growing right in-between the leaves. Flowers bloom in April to May. The fruit ripens later in the summer. The fruit is a berry about the size of a small plum when fully ripe. At first green, it changes to a soft yellow at maturity. When fully ripe it has a fragrant odor and tastes somewhat like the paw-paw.
Range: This plant is native to Eastern North America. Locally, it prefers rich and moist, but well drained, soils (also known as mesic soils), and partial to deep shade. This combination makes it a very common wildflower along streams with forest cover and deep sediment deposits along the margins. It can form colonies and its broad umbrella-like leaves make it very easy to spot. 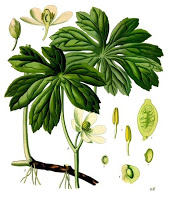 Notes: May Apple is considered medicinal and its fruit is edible when ripe. It was used quite extensively by Native Americans. In fact, evidence suggests that its northernmost range extends into Canada only because of Indian cultivation after the last ice age.
The fully ripe fruit can be eaten raw, cooked or made into jams, jellies, marmalades, and pies. It is very aromatic, and has a sweet peculiar but agreeable flavor. As a word of caution, all parts of the plant except the ripened fruit are considered toxic. The root and plant contain valuable medicinal (and toxic) chemical compounds including Quercetin, Kaempferol, Podophyllin, Isorhamnetin, Gallic-acid, Berberine, and Alpha-peltatin. The plant was used up until the 1970’s as a treatment for herpes (over 130 tons of the roots were harvested in the US in 1970!). An Asian counterpart to this plant was discovered and with the benefit of cheap labor this medicine market quickly shifted to Asia. That Asian species is now nearly extinct because of the resulting harvest, and interest in creating sustainable Mayapple farming techniques here in the US is growing.
The plant has been used historically as a poison as well, especially as described in English Lore. A local farmer mentioned this to me, as he is from England. The English version of this plant is known as Manroot (and Mandrake), and the mere mention of the plant to this Englishman brought up bits of dark European lore. And of course, given its powerful chemical properties, its historic use is associated with witchcraft. Be careful handling this plant! Do not eat the fruit unless you have the guidance of an experienced May Apple harvester. Though it’s contents can produce nutritious and delicious jams and jellies and its roots contain antimyotic cancer treating agents, maybe this plant is best enjoyed with the eyes!!

2 thoughts on “May Apple”