Skip to content
By Ezra Staengl, Center for Urban Habitats
We looked around at the hard greens and browns of the heath, breathing in the crisp morning air.  Today, despite being only late July, was one of the first days that you could begin to smell the cool, musty scents of fall.  The Center for Urban Habitats was conducting a biological survey on a small property in western Orange County.  Our first task was to walk the perimeter of the land and locate sample plots that appeared to best represent their given plant community.  Later, these would be surveyed exhaustively; with every plant being identified and counted in order to best classify the plant community.
Devin, Drew and I walked a small trail through dense thickets of black huckleberry, deerberry, and hillside blueberry under a forest dominated by small black gum, black oak, and white oak.  I reached down and pulled a long, slender snakeskin off of the huckleberry, thinking it looked like the perfect shape for a rough green snake.  Closer examination revealed little rows of keels on the scales, a feature that only a couple other snakes have.  We put the snake on our fauna list for later confirmation, and continued.  The trail under the heaths was covered with a dense layer of mosses and lichens as the forest opened up into a small clearing.  The herb layer was very light, allowing a good view of the dense carpet of mosses and lichens below.  Looking down, we could see more than ten species of lichens and mosses right by our feet. 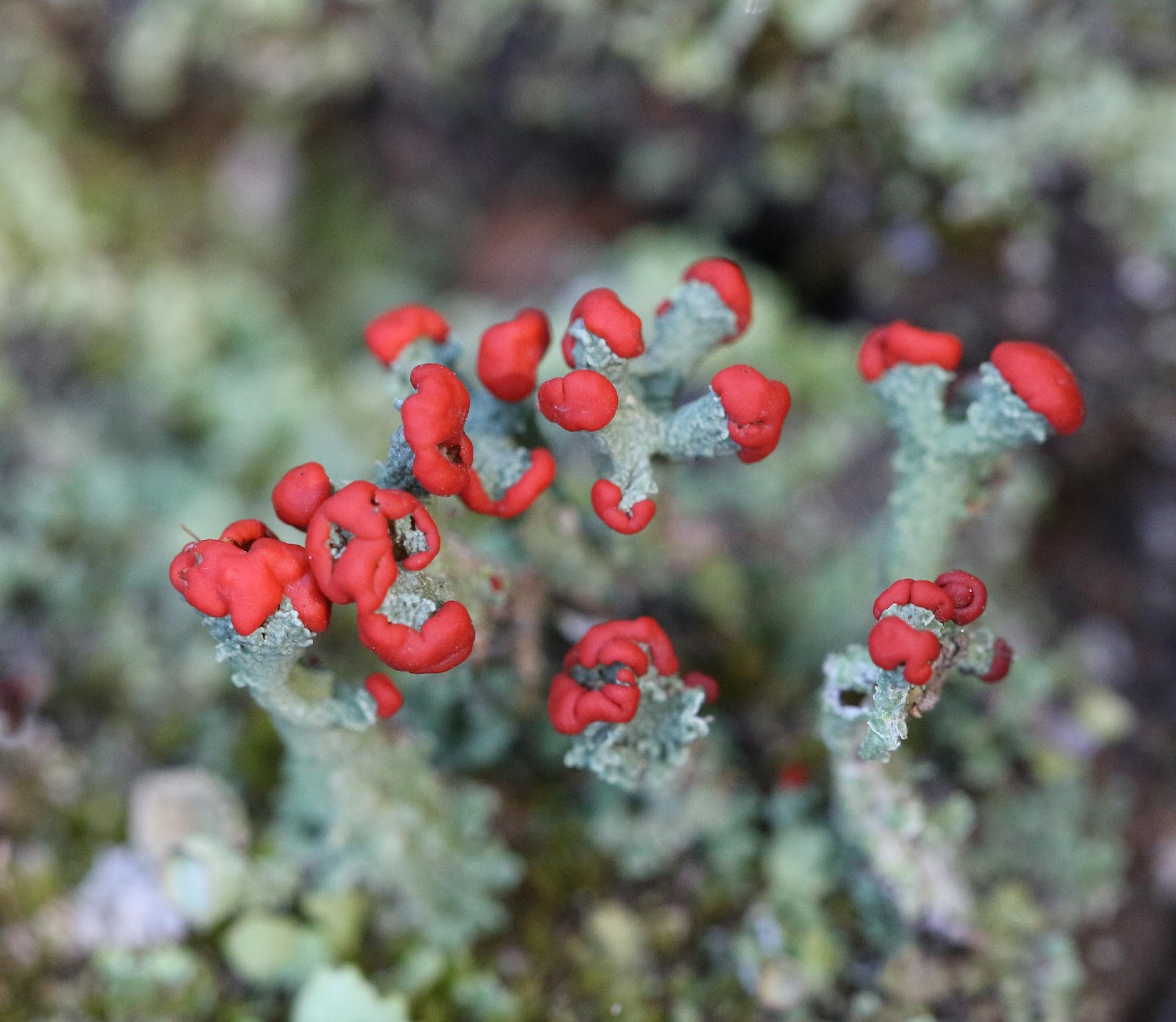 Deciding to come back and sample this area thoroughly just for the incredible bryophyte diversity, we continued down the property line, which was soon marked clearly by a large power line cut.  Powerline right-of-way meadows can be filled with native prairie wildflowers and pollinators, a vibrant community that no doubt once existed at this site.  Unfortunately, in the wake of sprayed herbicides, the powerline right-of-way resembled more of a wasteland than a piedmont prairie remnant.  Large stretches of brown earth were visible, interspersed only with stumps and the deformed unhealthy looking native herbs that managed to survive.  Ironically, periodic disturbances can be important or even necessary for the survival of this plant community, as in the lack of human or naturally occurring disturbances, succession would take it back to a forest.
Leaving the mutilated power line corridor, we walked into the dry heath forest.  Dry acidic habitats such as Oak/Heath forests are not known for their biological diversity.  The mean species richness for our area is only about 30 plant species per survey plot, one of the least species rich communities in our area.  Trees growing on heath soils typically don’t get as large as trees growing on richer substrates.  We didn’t see any trees bigger than two feet in diameter, even though many of those were likely older than 75 years.
After we had finished our walk of the property, we decided on the location for our heath woodland survey plot, and set to work outlining and getting familiar with it.  The ground was carpeted with dense stands of deerberry, black huckleberry, hillside blueberry and common greenbrier, which gave us quite a hard time moving about the plot.  The (relatively) big trees were mostly scarlet oak and white oak/post pak hybrids (Quercus x fernowi) that were much more prevalent than either of the parent species.  In the understory, black oak, white/post oak, black gum, and sassafras were the dominants.  Diffuse light filtered through the dense shrubs and huckleberries, making dancing patterns on the dry loam of the forest floor.  Each of us chose a layer of the forest to survey.  We identified and counted every plant, and then estimated how much of the ground that plant’s canopy covered.  We would later use this information to classify the plant community.  Occasionally, an insect or bird would fly by, interrupting us from our work to chase it, as the plants would stay still, and the animals wouldn’t.  I found a maple looper moth (Parallelia bistriaris) in the leaves, a small surprise, as its main host, red maple, was quite uncommon in the plot, with only two young ones being observed. 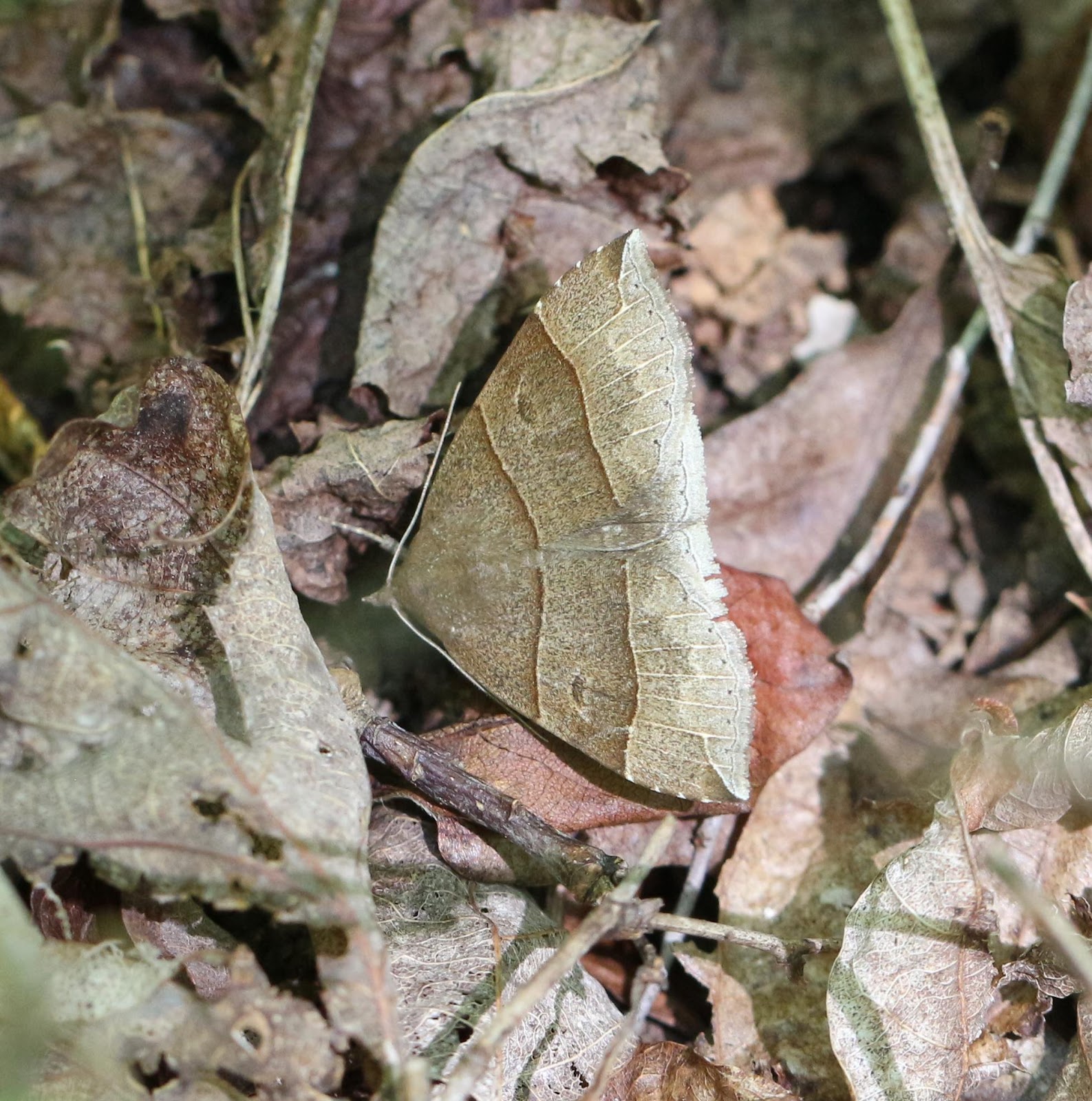 We also saw a Red-spotted Purple ovipositing on a Deerberry, an interesting observation of what host plants its caterpillars favor.
As we were finishing up, we talked about other plants, including pink lady’s slipper, American chestnut, and large whorled pogonia, that we might expect to find as outliers from our plot in the surrounding woods, given the habitat type.  Sure enough, Devin soon found an American chestnut.  Like every other remaining chestnut in Virginia, it was a small shrub with its old dead trunk looming over it, killed by the chestnut blight.  Right as we were turning to leave, I glimpsed a pale green whorl of leaves out of the corner of my eye.  The leaves were too pale and stubby to be Indian cucumber root, and the venation was wrong as well.  Soon we had found more large whorled pogonias (Isotria verticillata) in the area. Although I have only seen this species of orchid once before, it is apparently fairly common, known from every piedmont county.  Still, I am always excited to see a native orchid thriving, especially in such an interesting and challenging environment as acidic woodlands. 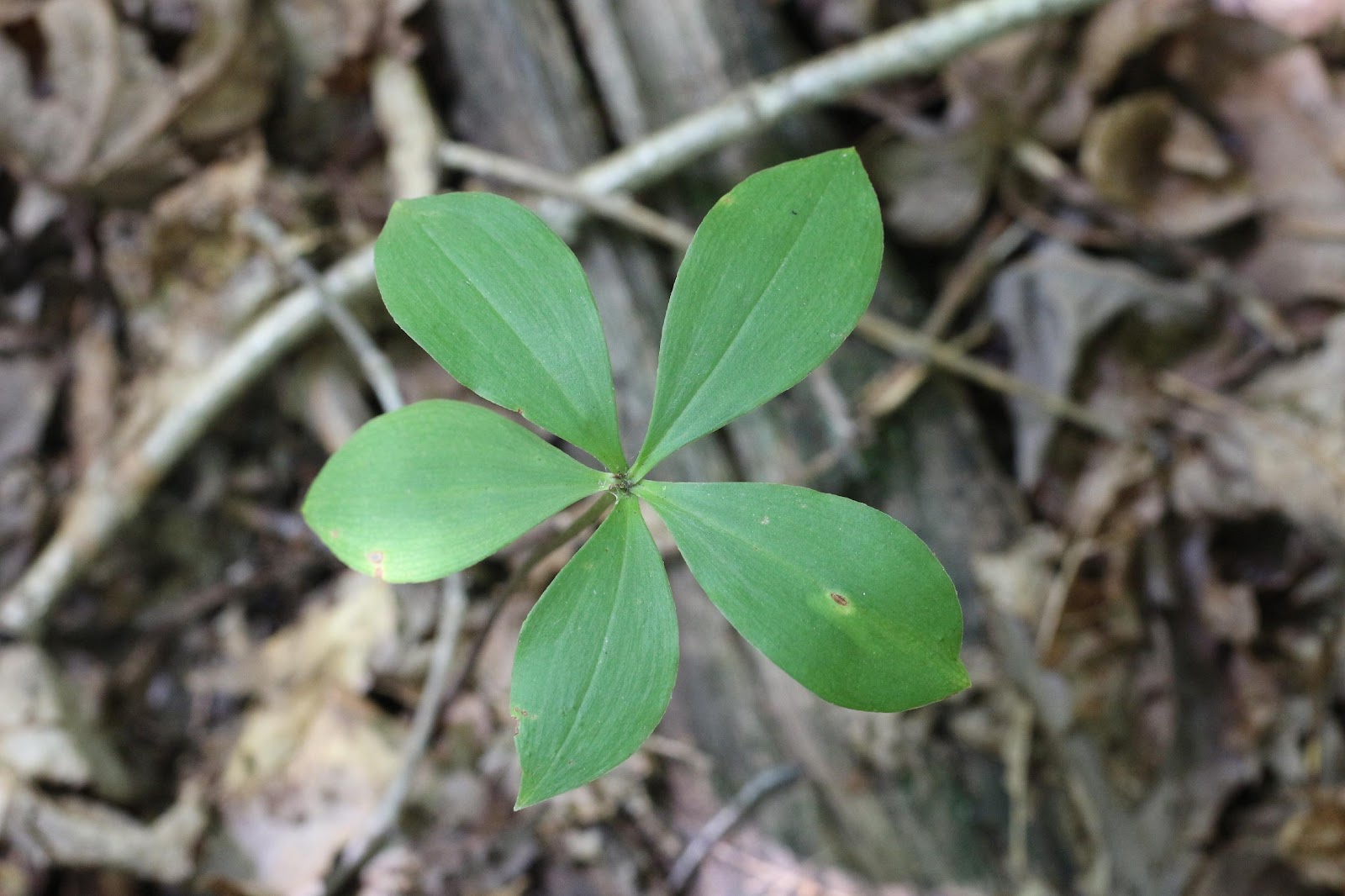 A little further on, a ravine cut through the slope.  In this area the forest changed slightly, with some species more suggestive of a base rich substrate than the surrounding heath.  We found one tiny ash seedling at the very bottom, a wild yam, and a small grove of tulip trees, a species that had been present in much smaller numbers all day.  Thinking this might represent a transition onto a more calcium rich geologic substrate and classify as a different plant community, we decided to investigate further another day. 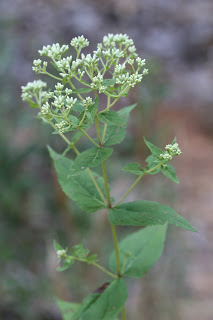 Moving back through the power line clearing, we photographed and identified some of the asters and goldenrods in more detail, while keeping our eyes out for insects.  We found several indicators of a once healthy ecosystem, with nice prairie flowers like goldenrods and Godfrey’s thoroughwort, wild bergamot, and toothed white-top aster present in small numbers. Hugging the ground, we collected several different species of Dicanthelium grasses to identify later.  One that particularly caught my attention was bushy and compact with interesting super slim lance shaped leaves.

Our final location for the day was a brief check of the property owner’s mint garden to add butterflies to our fauna list.  Gray and red-banded hairstreaks and hoary edge skipper were some of the more interesting species that loved the mint.  Silvery checkerspots were also present, along with more common butterflies like silver-spotted skipper, pearl crescents, and zabulon skippers. 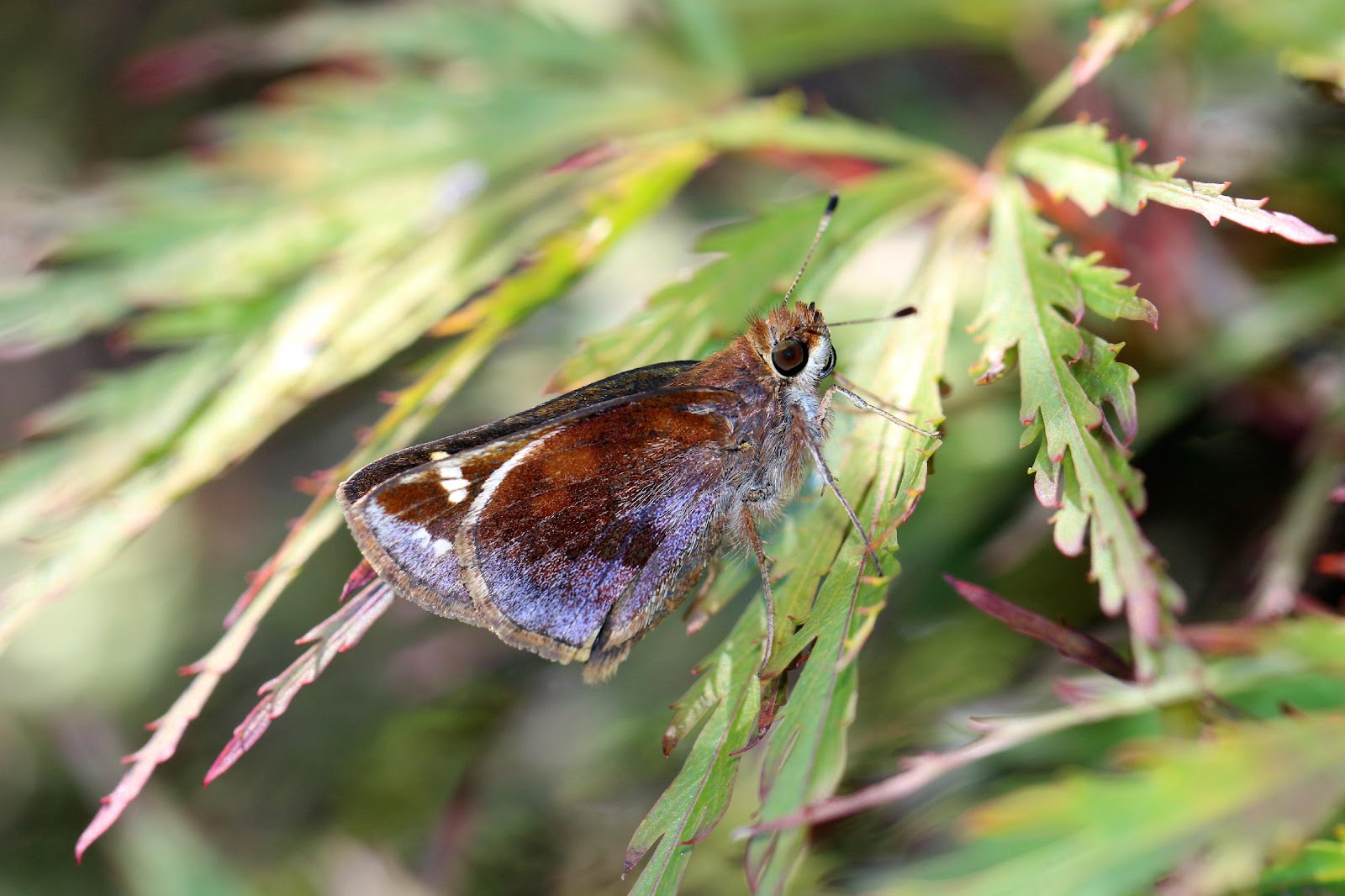 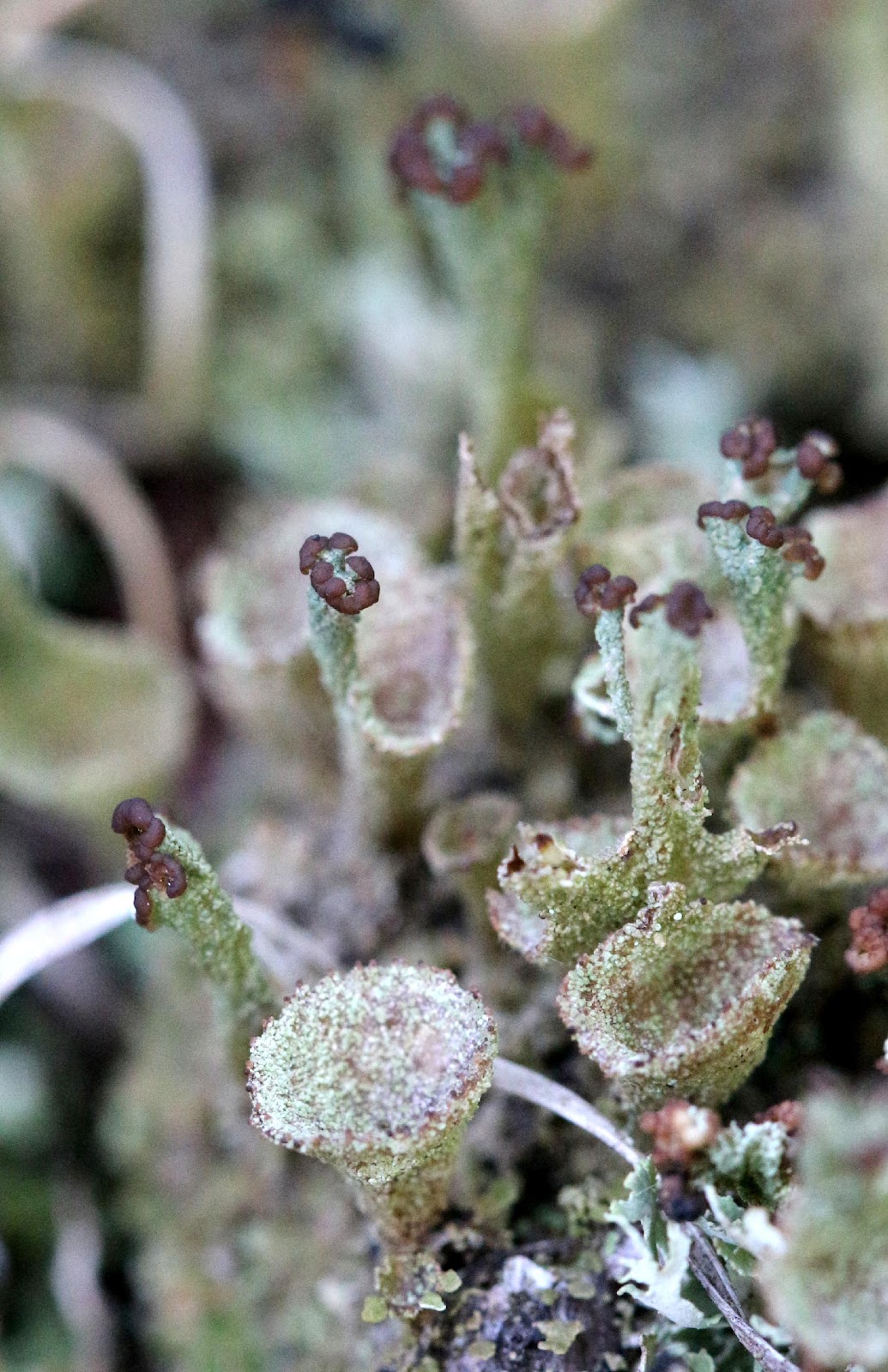 On our final day of survey, we only had a morning in the field to inventory the bryophyte area and survey the ravine sample plot, as we needed the afternoon in the lab to enter our data and sort out more complex species identifications. We started with the bryophyte area.  While Drew fully inventoried the herbaceous and shrub layers, Devin collected samples from the mosses and lichens to attempt to identify later in the lab.
Done with the bryophyte spot, we headed down through the heath woods to the ravine where the dense Black Gum shrub layer thinned out and the area became more open.  The ground was richer and more diverse, with white snakeroot, a bugleweed, young hackberry, and even a young spicebush. We quickly marked the parameters of the plot and divided up the layers of the forest to survey.  I took the shrub layer, and it was much more enjoyable than my attempt at the thick shrubs of the heath plot yesterday.  In this plot, there was almost double the species in the shrub layer, but not nearly as many individual plants, making for more interesting, less tedious work.  In the whole plot, I only counted three black gums.  The dominant shrubs were the white/post oak hybrid, pignut hickory, and mockernut hickory, but there were also white ash, eastern redbud, ironwood, American persimmon, and red mulberry.  There wasn’t much hillside  blueberry and no black huckleberries at all, unlike in the heath.  On one of the three red hickory in my layer, I found a small, fuzzy white caterpillar with massive black and white spikes of hair.  I photographed it, and in the lab we determined it was a banded tussock moth caterpillar (Halysidota tessellaris). 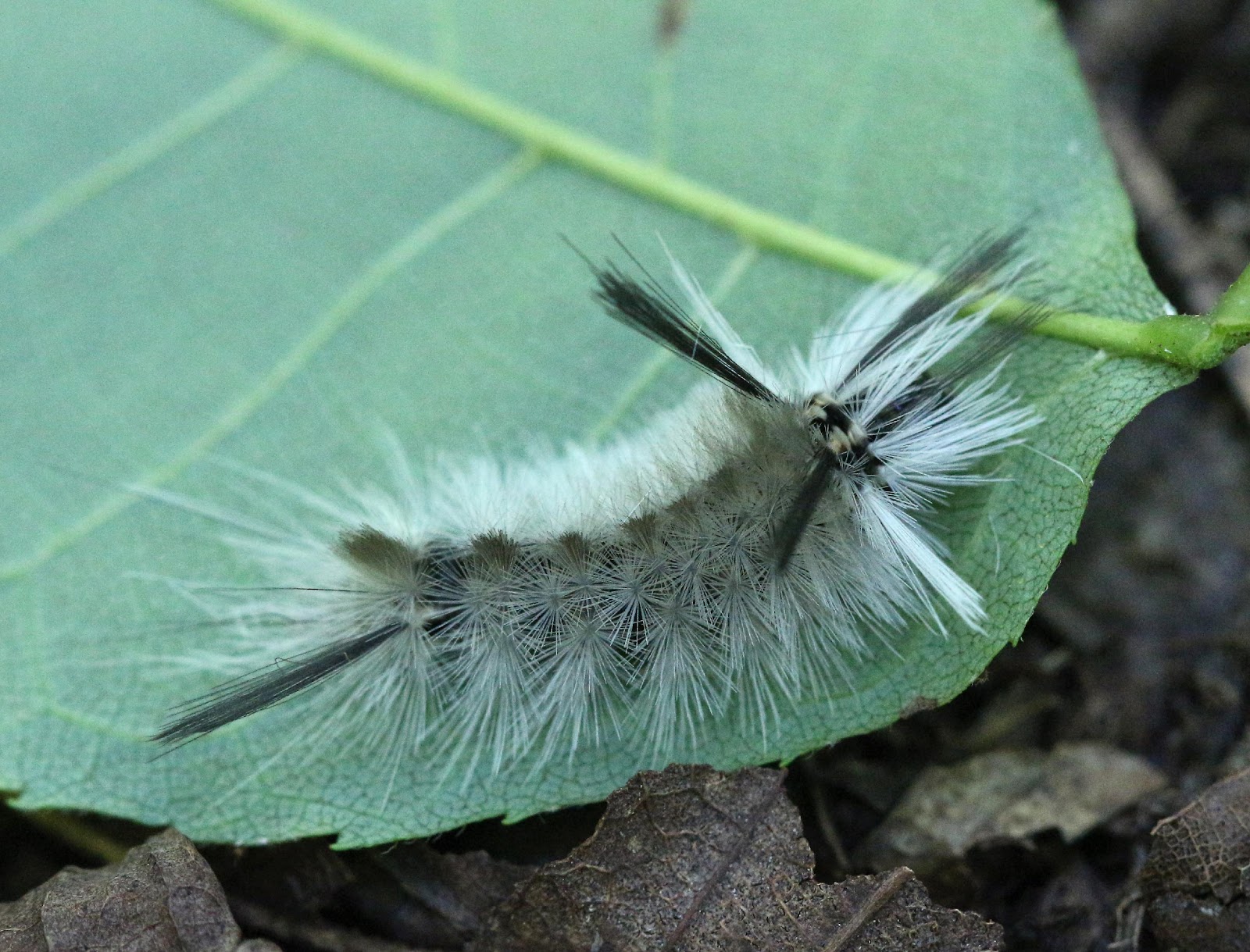 It remains to be seen whether or not we will classify the ravine plot as a separate plant community from the Oak/heath plot, but it definitely had many different and unique characteristics.
After lunch, we got to work on data entry and identifications.  I worked on confirming the identity of the snakeskin we found on the first day.  From size, scale keeling, and scale count I determined it to be either a rough green snake as we had expected, or a northern brown snake.  Since we only had the skin, and the head scales were missing, we couldn’t confirm the identification, but since it was in bushes in a dry, acidic habitat, (a common haunt for rough green snakes but fairly poor habitat for northern brown snakes), we are fairly certain it was a rough green Snake.

Ezra Staengl is a thirteen-year old homeschooler who lives in Nelson County, Virginia.  This is his second year as a local genotype plant grower for CUH, and his first as a writer and photographer.  He loves to bird, explore the rich natural communities of Virginia, and blog at birdsandbuds.com.