Skip to content
By Ezra Staengl, Center for Urban Habitats 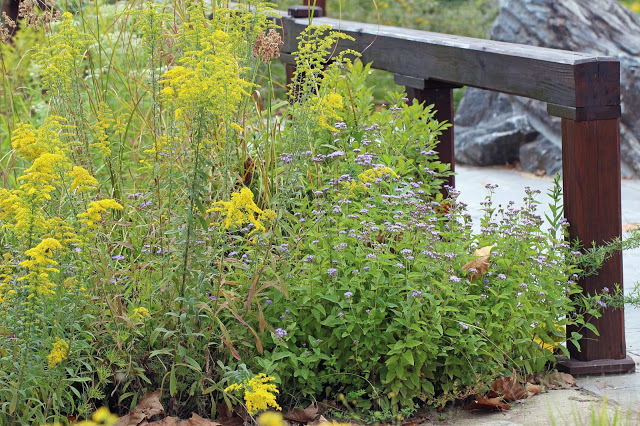 The Quarry Gardens property was used as a soapstone quarry between the 1950s and 1970s. After the soapstone industry abandoned it, the community used it as a dump until Armand and Bernice Thieblot bought it in 1991. In 2014 the Thieblots embarked on a mission to create a publicly accessible native plant botanical garden, showcasing the unique local native plant communities of the quarry’s soapstone geology. The Thieblots hired The Center for Urban Habitats (CUH) to plan and plant the gardens.

CUH has a very unique approach to landscaping, ecosystem modeling, which involves replicating naturally occurring plant communities in garden settings. When CUH approaches an ecosystem modeling project, they observe factors such as geology, topography, elevation, drainage, existing plants, and lighting to help them infer from experience gained during prior surveys elsewhere what plant community is best suited to each exact location. Their specialty is figuring out the “ecosystem trajectory” of an area based on these existing site conditions. CUH studied the Quarry Garden project area for six months prior to planting, conducting an extensive biological survey to identify and map the distribution of existing plant communities.

Today, the 40 acre Quarry Gardens consists of nine main sections, each with numerous native plant gardens. Two huge, semi-rectangular water-filled pits, the remnants of the old quarries, dominate the center. If you look closely at the tall, vertical soapstone walls of these quarry pits, you can see the grooves in the soapstone left by the quarrying process. Piles of giant discarded soapstone chunks are distributed around the property. From the parking lot, the land slopes gently down towards the quarry pits. It continues to slope down on the other side of them, all the way to a small, meandering creek, which flows through a sunny, wet clearing just off the property. Two gravel roads lead around the quarry pits from the parking lot, one traveling the parameter of the property, and the other forming an inner loop around the quarry pits. From these roads, one can see most of the beautiful plant communities that have been planted here, from the bright flowers of the viewing platform prairie to the dull greens of the piedmont hardpan forest. The planted gardens blend perfectly with the surrounding natural plant communities.
CUH learned about the geology of Quarry Gardens mainly from observing sections of exposed rock and the existing plants. They saw piles of soapstone boulders left over from the quarrying process, and the huge portions of rock that were revealed in the walls of the quarry pits. They also studied the present plant communities to infer the type and location of the underlying geology. They found that the plant communities could be divided into two main groups based on their tolerance of either ultramafic, a high mineral soil type with more magnesium than calcium, or acidic soil conditions. Ultramafic soil is so high in magnesium that it is toxic to many plants. CUH knew that soapstone bedrock, which includes many different types of ultramafic rocks and minerals, had to underlie plants that could tolerate ultramafic conditions. Similarly, CUH inferred that the Charlottesville Formation, which consists of mineral poor sedimentary rocks, must underlie the observed plants in the “heath” community, which occur in acidic, nutrient poor soils. Later in their process, CUH conducted soil tests, which provided more details about the geology.
The soapstone bedrock that underlies most of Quarry Gardens supports some very rare plant communities, including ultramafic woodlands.  Fragments of this nearly vanished plant community, dominated by old post and pines over an understory of little bluestem and greenbrier, remain around the parking lot of Quarry Gardens.  The most abundant tree in the ultramafic woodland at Quarry is Virginia pine, a species that under natural fire regimes would have been less prominent. Ultramafic woodland is so rare in Virginia because it can only be found on ultramafic rocks, like soapstone, and it requires periodic disturbance in the form of fire to keep less fire-adapted plants like the Virginia pine from encroaching. Since soapstone is such a rare and commercially desirable rock, quarries have almost completely destroyed ultramafic woodland in Virginia.
Two other plant communities that grow over the soapstone bedrock at Quarry are piedmont prairie and hardpan forests (with swales). Gardens showcasing these communities are prominently located in front of and behind a viewing platform that overlooks the large quarry pits. Under the thin soils of the prairie and hardpan swale lie huge soapstone boulders, remnants of a filled in quarry. The gaps between the boulders are filled with smaller bits of soapstone, such as pebbles and soapstone silt. Due to this, the drainage in the viewing platform area varies extremely widely. The piedmont prairie drains immediately and is hot and dry for most of the year, while the hardpan swale is virtually always wet.
The extreme drainage conditions and high magnesium levels of the prairie combine to make this area only inhabitable by the toughest species growing in piedmont prairies.  CUH chose species that could survive the extremely dry and high magnesium present by selecting piedmont prairie species that have been found growing on serpentine barrens and ultramafic barrens, which share these harsh conditions in an even more dramatic fashion. Forbs chosen for their toughness and tolerance of magnesium include hoary mountain-mint, gray-goldenrod, tall thoroughwort, white colicroot, and glade wild quinine.  Important grasses included poverty dropseed and little bluestem.

Looking at the viewing platform prairie, one would never know how challenging the growing environment is.  Most of the plants have flourished here, creating a colorful testament to the resiliency of native ecosystems. Bold clumps of hyssop-leaved thoroughwort with feathery white plumes buzzing and humming with insects towered over smaller species.  Gray goldenrod, showy goldenrod, sweet-scented goldenrod, and wrinkle-leaved goldenrod all bloomed profusely.  Over to one side, near a quarry pit, the triangular leaves and strangely shaped flowers of spotted bee-balm accented the area.

Plants were selected for the hardpan swale that tolerate poor drainage, and that had been documented locally in magnesium rich hardpan swales. Winterberry, golden ragwort, and blue mistflower were prominent. The blue mistflower was especially noticeable in September, as it created brilliant cushions of blue flowers that seemed to float above the wetland sedges. Lush longhair and sallow sedge blanketed the ground.

Ezra Staengl
is a thirteen-year old homeschooler who lives in Nelson County,
Virginia.  2018 will be his third year as a local genotype plant grower for
CUH, and his second as writer and photographer.  He loves to bird,
explore the rich natural communities of Virginia, and blog at
birdsandbuds.com