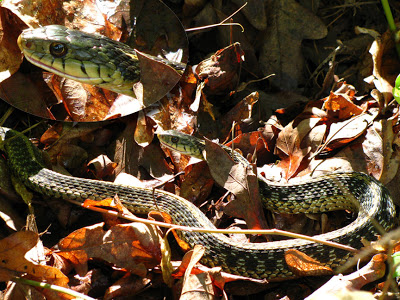 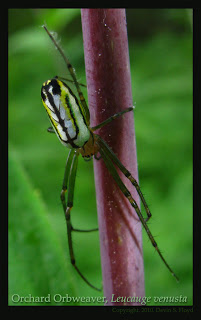 On this morning’s Father’s Day stroll, while enjoying the fruits of a pleasant family outing, we saw new things among the familiars. We munched on wineberries and only a couple of dewberries. We built dams in the creek and caught a snake. On this occasion, and in the moments between being a child, I made an effort to spend less time confirming things I knew, and more time paying attention to things that were fresh and new.
Here are some of the day’s discoveries…some new wonders, and some reminders of things forgotten.
First, the reminders:
Garter snakes (Thamnophis sirtalis sirtalis) emit some serious stink! I crossed one’s path in the woods off the trail, and it struck at me before I even saw it! It’s patterns blended perfectly with the surroundings. After strike one it coiled in a fearsome position, it’s head splayed flat and diamond-like. After a couple more strikes it stopped…I picked it up, and the whole family had a quick look at this beautiful creature. After gently releasing it, I bolted to the creek to remove some of the oil it had released in its defense. Sand, mud, grass and water were no match for the rancid oil.
You can fool fish with artful replications of insects. We did this for a bit, using black willow and green ash stems and leaves and goose feathers. The first “insect” resembled large fly, the second a bumble bee of sorts. Both met a very quick end when, upon launching them out into the pond, large Bluegill attacked. All we needed was to devise some string and a hook….alas…off to building dams in the creek instead. Following young children always takes you on a small whirlwind tour of muddy and weedy wonders.
Luck is just as important as patience. Today I received an unusual Father’s Day gift. After years of searching, a four-leaved clover found me. I was in full stride, and with a glance downward unusual plant symmetry struck me. I stepped on it, but did no harm. It was a solitary plant, reaching up through a small basal-leaved plantain. White clover.
The new things:
Narrow-leaved Mountain Mint (Pycnanthemum tenuifolium). We found a grove of this very distinctive plant flowering along the trail. The crushed leaves have a very nice odor, and the flavor was similar to cilantro. I would recommend it for the garden, as it was growing profusely in a fairly dry and exposed area…low maintenance!

Bladder Campion (Silene cucubalus). This wildflower was found along the trail in several localities. It has beautiful white petals and a large swollen green bladder beneath. Apparently, the leaves are good edibles if cooked (the saponin will leave a bitter after-taste if eaten raw).
Mouse Ear (Hieracium pilosella). We’ve seen it before, a common pioneer plant growing in dry sandy places. It gets its common name from its small fuzzy basal leaves. The flower itself is a dead ringer for dandelion, and has similar non-native origins. Its pioneer status has always interested me, but this was the first time we looked close enough to figure out what kind of plant it is. This plant contains umbelliferone, a chemical compound that is extremely efficient at dissipating sun light (three different areas of the light spectrum!). So, of course, it is commonly found in sunscreen. 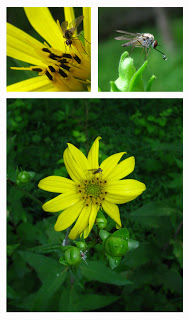 Pale-leaved Sunflower (Helianthus strumosus). This tall plant, reaching for the sky up to about 5 feet tall, produces a flower that rivals all garden flowers in its beauty. The continuous flow of insect pollinators reminded me of the importance of co-evolution in creating healthy ecosystems. We plant beautiful flowers in our gardens, but mostly those that have been cultivated to be attractive to human eyes. Insects see in the ultra violet spectrum, which means flowers look totally different to them. I have heard it mentioned that the so-called “native” cultivars we plant in our gardens and fields are inferior in their UV display, and therefor do not perform the function we intend very well. In selecting flowering plants for our gardens that attract bees and butterflies, would it not be wise to look through their UV lens in doing so? Given the constant insect traffic on this wild native sunflower, would it not be an excellent urban garden plant for supporting diversity…for enriching your day-to-day experience? For a glimpse into the world of insect vision, check out this photo of a common flower that looks plain yellow to humans, but like an attractive bull’s eye to insects: Buttercup