We attempted to dry the persimmons we collected yesterday and it worked like a charm! I just placed them on a drying rack with a small mesh and put them in the oven for about 8 hours at 140 degrees. They shrink dramatically, becoming quite chewy with an enjoyable texture.

We ran into one problem, and it’s a tricky one. Most of the dried persimmons are too bitter to eat. The tannin content is just a bit too high. I immediately reflected back upon our collecting techniques and remembered that the very first persimmons we tasted were those already on the ground. These had no bitter quality. They were very sweet and pudding-like.

So, a hypothesis is formed. Could it be that persimmon trees release their fruit slowly over extended amounts of time? And, more importantly, it appears that there is a moment in time during which the “sweet” (glucose) is maximized and the “bitter” (tannin) is minimized. On top of that, it seems that this moment is also the moment it falls from the tree!…splat!

Yesterday most of the persimmons were gathered by shaking the tree. Those that dropped with the first gentle shake were probably the most ripe. I really had to lay into that tree to get more to drop, but some did. These were probably a wee bit less than ready. We ended up resorting to using a really long ailanthus stick to knock some of the remaining fruit from the tree. And still, many just simply would not let go!

About 90% of what we collected took more effort than should required to harvest fully ripe and sweet fruit. So, I’ve got a pile of dried and bitter persimmons….and the kids mind less than I do. But, refining a method of harvesting will be fun. It will require a bit more attention paid to the stages of ripening. It may also require an extended and attentive harvest period…and there is one of the two primary problems for sustainable use. It requires patience and increased awareness, both of which most folks have a hard time with.

So forward we go, gently shaking those trees and catching what falls…and learning along the way. There are likely many other variables that determine how much tannin are in the fruit…and this may vary from tree to tree. Time will tell, we shall see! 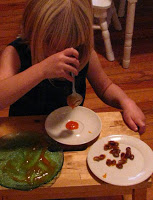 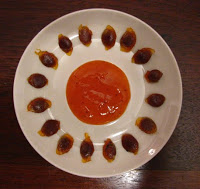