Go see these pigeons in the morning, and take your kids. They have been congregating at the same place and time at the peak of Belmont Bridge in C-ville, pre-10am on a power line(after which they aloft to other places, like the top of the pavillion). They are fun to watch, as they preen and clean, and position themselves relatively equidistant along the power line. Their variety is interesting, as are their social habits.
These Pigeons, once known as Rock Pigeons, are relatives of birds that were long ago domesticated. Many of these pets and otherwise domesticated birds have been reintroduced to the wild over time resulting in what ornithologists now call Feral Pigeons.

Upon release, they begin a slow process of reverting back to their ancestral qualities, those of the wild Rock Pigeon. These birds enjoy city architecture so much because it resembles their wild habitat, rock cliffs.
While we take these creatures for granted, they have various important functions within our ecosystem and tell a story that speaks of us humans and our movements through time.
P 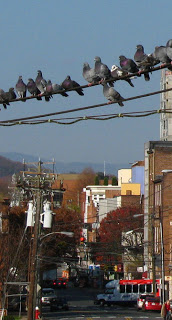 igeons are very efficient cleaners, eating our dropped food/trash…though this is balanced by the droppings they leave behind (so long as this does not accumulate in large quantities it probably isn’t a problem…may even be good fertilizer for plantings along edges, in islands, and other city garden arrangements). Feral Pigeons also serve as a reliable food source for Predators that have adapted to hunting in the city like the Cooper’s Hawk and Red-Tailed Hawk, both of which can be seen regularly, racing low above the downtown area…undoubtedly in hot pursuit. Other local native species enjoy them as well, such as owls and a few mammals that will catch one by surprise on the ground.
The Feral Pigeon has been in North America for nearly 400 years, and has since been joined by great numbers of other non-native plant and animal species; the total of which has certainly increased at a rate equal to our level of global connection, trade, and reliance. This is one of the beautiful ecological wonders of cities, the complex soup of intermixed lifeways, some of Nature’s wildest places for sure. Once one becomes familiar with Native and Non-native species and is able to discern relative proportions in cities, one sees a mix that mirrors the mix of new and old human culture present, the melting pot…undoubtedly reflecting the exchange of ideas and materials that is enriched by the convergence of diverse peoples. 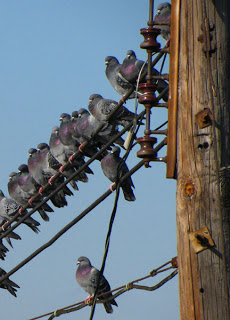 You’ll find also that the pathways of trade and delivery to and from these cities, bringing goods from all over the world, will also be lined with plant species that will point to the sources of import…Colonial America and European roots are seen in floral mixes along paths of old, at historic plantations, along old roads and in old fields… China, Japan, Korea and greater Asia dominates paths of new, highways, interstates, city lots and garden centers. There is a oneness seen in this kind of reading, a reading of landscape. It is all part of Nature’s book. A mix of trees, an insect zipping by, a wildflower, a weed or a feral pigeon on a power line can tell a powerful and meaningful story to those that can read Nature’s pages. Learning to read is fun! So get out there! Look closer, question more, inquire, and share what you find and learn with others.

-I learned a lot researching the Pigeon for this posting, and the majority of the information that was new to me came from this website, a wonderful birding resource: All About Birds