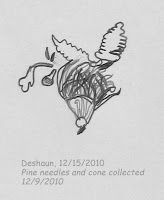 On December 9, 2010, Mr. Hartline’s class of third graders explored the forest behind Jackson-Via Elementary School. On that exploration, we noticed that a portion of the forest had lots of pine trees. Pine cones and needles littered the ground. The kids brought dozens of pine tree samples back to the classroom. (For a description of that outing: A School Yard Forest )
This week I returned to the school to join the kids in learning a bit more about the needles and cones they collected, and what that might say about their forest. Our hope was that these samples could help us figure out what kinds of pine trees grow there. 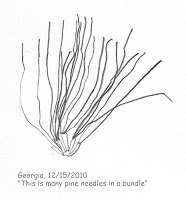 We began with some conversation and storytelling. We talked about the important role that art plays in science. Several examples were shared, including color and black and white illustrations. Doing a drawing is a great way to learn about an object (like a pine needle)…”getting it right” usually forces one to look closer and take note of detail. Drawings and paintings are also commonly used to share discoveries with others, convey something that is often difficult to get across with photographs, and to inspire others to take action.

We then explored the idea of “diversity”, what it means and why it is important. I used the “Smart Board” (which turned out to be not so “Smart”) to illustrate the idea of forest succession, and how the school yard pine forest might have come to be. We also explored the future of the forest, and how it might change and why. The woods at Jackson-Via are very useful for teaching succession, as two stands of differently aged forests adjoin one another right at the trail head. We quickly moved into using art as a tool for inquiry. Everyone picked some needles and cones and and illustrating began. The kids soon discovered the importance of detail and scale, if they were going to use their drawing to accurately convey the subject to another person. During this process of “learning to see”, attention was drawn to the needles, and the fact that they all came in groups called “bundles”. This brought further detail to the drawings. 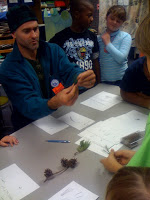 After everyone had ample time to draw needles, the entire class gathered around one table. All drawings were placed in the center of the table, and we began the process of sorting them into piles based upon differences and similarities. The first distinction made was differences in numbers of needles per bundle. We ended up with three piles, though almost all drawings ended up in the pile that was for “two needles” per bundle. We had a couple of examples of three, four, five and even more. (Having watched the illustrators do their work, I can say that these were mostly the result of lumped bundles and a couple of wonderfully abstracted drawings). Next, we divided the “two needle per bundle” pile according to needle length. This brought attention again to the importance of scale in illustration. We ended up with two categories: short needles and longer needles. The short needles were somewhat twisted and thicker than the longer ones.

I told the class how six species of pine trees were the most common in the area (loblolly, white, Virginia, shortleaf, pitch, and table mountain). With some research prior to this class visit I discovered that these are the most common native pine trees in the Charlottesville area. Only three of those local pine trees have two needles per bundle: table mountain, Virginia, and shortleaf(occasionally with three per bundle). After some discussion, we concluded that the two types of pines represented in our sample were shortleaf pine and Virginia pine. (table mountain is uncommon around Charlottesville, and is generally restricted to dry and rocky high elevation habitats in this area). So, thus far the students have discovered at least two pine species on their school grounds, and it is very possible that there are more. Searching for more pine species will have to wait until the New Year! I think the next exploration might be, “Who thinks we can find another kind of pine tree in those woods?”.