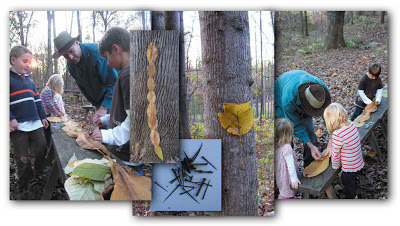 Here are some images from this week’s PGIW activity. As is usual with this group of kids and adults, free play, exploration, discovery and creative activity was on full display! This site at Kemper Park (more commonly known as Monticello Trail) is visited by this group most weeks, with a different variety of people showing up dependent upon schedules.
Today’s activity covered a broad spectrum and if I remember correctly, there were five adults and ten children present. Aside from the general free play and exploration, many creative activities were facilitated.
One of them included the gathering of thorns from what was either a hawthorne or a crabapple tree. The people that particpated in this gathering enjoyed the challenge of picking the thorns and transporting them to the activity site. There we began stitching cucumber magnolia and pawpaw leaves together with the thorns. This formed strands of leaves, one of which got attached to an ash tree (we tried to attach it to a white oak, but the bark was too hard and kept snapping the thorns). The remainder of the strands became kites…the leaf strands trailed wonderfully in the wind when held high during full sprint.
After this, several folks began picking leaves off the ground. I challenged them to find the tree that was the source of the leaf and attach it to that tree using the thorns. This was a good deal of fun, and proved to be a great way to learn about trees using the bark, structure, and the leaf (most trees still had some lingering leaves in their tops, so pattern recognition among the leaves was the medium through which on became familiar with the bark and structure). But, the thorns were the essential component! They provide just enough of a challenge to make things extra interesting.
On one occasion, the adults spent a few moments attempting to find the source of a rogue leaf, one that had obviously drifted. It was from a Northern Red Oak. It took several minutes to spot the giant oak in the distance, with its distinctive bark.
I was introduced to the Sweetshrub for the first time by Joanna, and decided to explore it in a bit more detail using watercolor and leaf-rubbing. Usually when I begin drawing the kids gather tightly around to watch…this occasion was no exception…pushing and shoving included! A few of them did drawings of their own of subjects and details at the site. I have made it a habit to bring several drawing and painting pads and tools (as well as containers and magnifying glasses) just in case moments of inquiry arise.
The images here are a selection of drawings done on site. Interestingly, most of the dark brown pigment used was walnut juice. 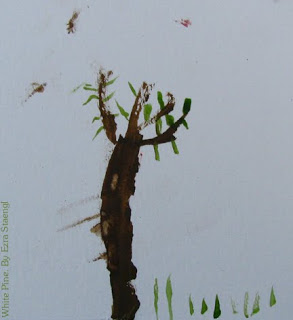 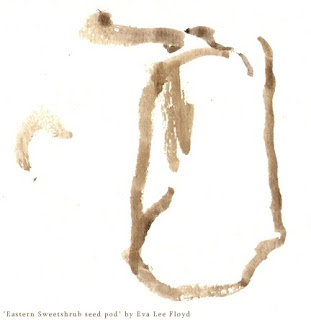 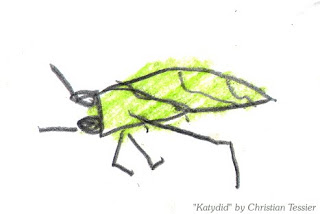 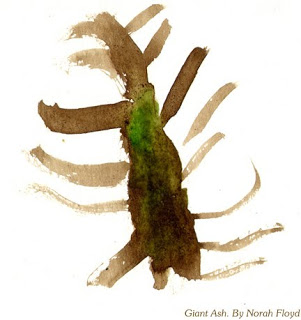 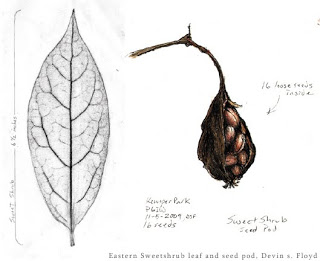