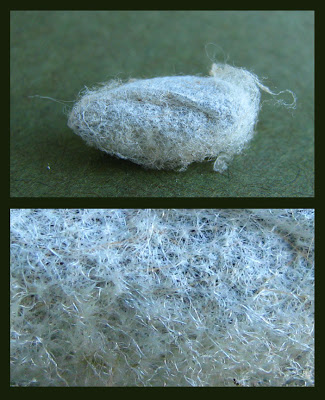 “Is this a cocoon?”. “What is this cocoon?”
These are a couple of the questions that have been tossed around a local schoolyard for over a month. Well, the inquirers want to know.
Despite the misleading clue of “spider”, everyone seems to be sticking to the hypothesis that this cocoon is somehow related to the thousands of tent caterpillars that are in the playground. Just a little over a month ago, these caterpillars absolutely blanketed the area, and this brought great joy to the children and teachers. In fact, these little brightly marked insects visit this playground every year at the same time. They love the native cherry trees, and it just so happens that the playground has at least two very large ones! It is very likely that the eastern tent caterpillar has been visiting these trees annually for a very long time!
Investigating the mysterious cocoons: 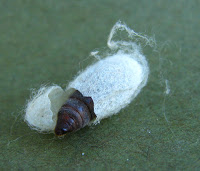 These white cocoons are woven of a very fine silk. Several coarse threads of silk attach the cocoon to a surface. They are easily seen on the big blue tarps in the school yard, likely because of the contrasting color. This morning it became clear that this school yard inquiry had run its course…the teachers and students wanted to know what these are! So, I brought one home and gently opened the cocoon. I used small scissors and carefully cut around the edge, avoiding the living animal inside.
There it was! A pupae!

It looks so similar to the Luna moth pupae we observed last year…the brownish grey exoskeleton, the body segments, the tiny little eyes, and tiny antennae wrapped over the face. Clearly, this animal will soon transform into a moth. And, yes, the hunches of the teachers and kids is correct! These are Eastern Tent Caterpillar cocoons.
If you will recall, back in late March the tent caterpillars began hatching from their eggs. They appeared as dense colonies in webs up in the cherry trees. They ate leaves voraciously for about 6 weeks. One day they just decided they were full, and they begin wandering about. This was when the kids began finding them all over the school yard. The caterpillars weren’t wandering aimlessly, as it seemed. They were in search of a safe spot to build a cocoon! This search lead many of them to various caterpillar adventures. Some of those little blue-streaked caterpillars got rides around the playground. I’ll bet some of them hitched rides from the school to homes scattered about town! And, many probably became caterpillar pancakes under playful running feet. Not to worry, they’ll survive and they’ll be back again next year. Each one of those caterpillars becomes a moth. And each moth can lay nearly 400 eggs!! So really, maybe a few caterpillar pancakes is not such a bad thing. Actually, to many people, squashing is not a bad thing at all. These critters are considered ‘pests’ nationwide, native pests no less. They do have predators, like wasps and parasites, but at times they can get out of control. 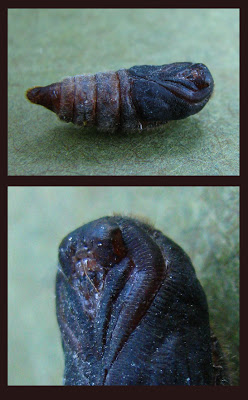 What happens next?
Well, that pupae will stay in the cocoon for only about three weeks! So, prepare yourselves for moths prior to the end of the school year. But, also be prepared to have to look really hard to see them. They will blend in to their surroundings (like most locally adapted species). They will be light reddish-brown, with faint light brown stripes on the wings. They are also quite small, only 1.5 inches long. So it may be fun to grab one of those cocoons and put it in a classroom terrarium. It should emerge within a couple of days. Be very careful with the cocoon if you want the pupae to become a moth. It is possible that the tiny silk attachment on the interior of the cocoon is what allows it to complete that final transformation (as with the Luna moth).
Once the moths emerge, they do what most moths do. They find a mate and the female lays eggs on its host plant, which in this case is usually the native Black Cherry (Prunus serotina). Here the eggs rest until next spring! Unlike some other moths, the Eastern Tent Caterpillar produces only one generation per year.