Going to the market, my spouse and children stumbled upon a giant fuzzy winged creature. They returned home with all sorts of questions. The puzzle was whether it had been a moth or a butterfly, and what kind. So, with all our guesses and guide books exhausted, little Eva and I returned to the site with our hypotheses. We walked two blocks…my 3 year old lead the way…and remembered exactly which tree it was on. “There it is!”, she exclaimed with pride and excitement. And, what a treasure indeed…. a gigantic, plump, fuzzy, and colorful female moth. 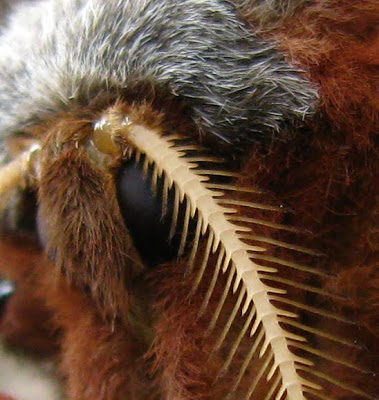 She remained quite still, with wings pressed back firmly. She appeared to be resting, and maybe her wings were still expanding and drying after a twilight emergence from a silken cocoon (she exhibited a posture similar to Luna moths I’ve observed during emergence, and her wing tips were still a bit moist and wavy). She had very delicate and detailed antennae, and was covered with reddish brown fuzz, the exact same reddish brown visible on the exposed inner bark of the tree behind her. She was certainly a moth, and we could tell she was a “she” by the size of those antennae….they were rather small…much smaller than the receptive fans the males carry around. 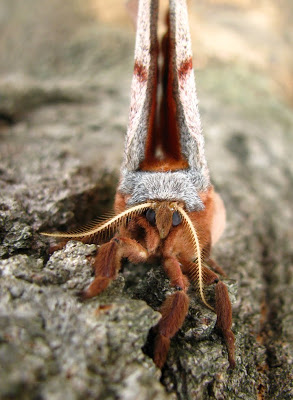 Antheraea polyphemus Her belly was huge. It really looked like it was going to burst. We concluded that this very evening would be the evening she laid her eggs in the tree above. She might place a few here and there, on the underside of the leaves. Her offspring will voraciously consume leaves, and chop them off at their petioles after eating each one, a behavior that apparently helps prevent predators from detecting the caterpillars’ presence. Her tree of choice was a Northern Red Oak, one of many potential host plants for this moth’s young, .

We watched, and pondered her very short and focused adult life….living not more than a week in moth form, and not feeding (no mouth parts!). We pondered how the caterpillars would consume nearly 80,000 times their body weight, an essential step in preparing for the pointed task of reproduction as an adult moth.
With some patience, and some encouragement, the wings began to open and spread flat against the tree. Her attempt to spook us (predators) made us say “Wow!”. 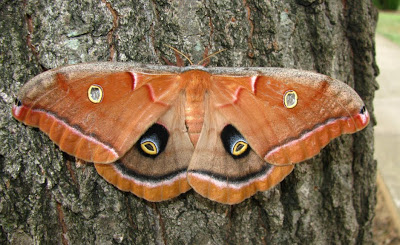 Those spots were striking. “Owl eye mimicry” has been the frequently used phrase. Well recently, studies demonstrated different reasons for the eyespot patterns…
Conspicuousness, not mimicry.
It appears that these patterns are there to distract, startle, and misdirect the attacking predator. In fact, if you touch the back of the moth it will either expose its bright “eyespots” by spreading the wings wide or quickly snap the wings shut on your finger. Both responses are quite startling.
It is enthralling to consider the long evolutionary history of attack, evasion, and mutation that might result in such distinct patterns and behaviors.
I wonder… when, in the distant geo-ecological past, was this genetic variety selected for? I also wonder how many thousands of beautiful varieties we are missing today because they were selected against!
For an overview of recent findings on “eyespot” mimicry, read this fascinating article: