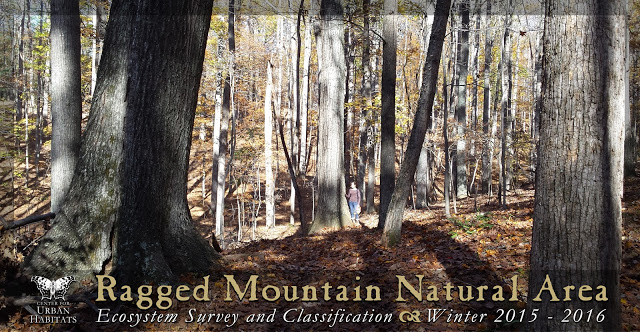 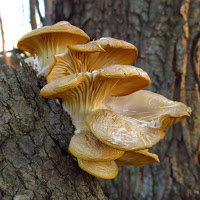 Here we are headed toward winter’s grip, and it’s time for
an Ecosystem Survey at Ragged Mountain Natural Area (RMNA)! Center for Urban
Habitats is excited to be coordinating this collaborative effort. Some big decisions must be
made about how best to manage the land and network of trails. We hope to
provide some context to the dialogue and decisions that are on the horizon.
Ragged Mountain Natural Area is at the northern tip of a large forest block that is a cornerstone for biodiversity in the Charlottesville area. There are some places upon our Virginia
landscape that maximize the peace and tranquility we find in the outdoors. This
is one of them! Within only a few miles of the City of Charlottesville, the
residents of Central Virginia find the vast and wondrous forests of RMNA.
Because of its beautiful forests and extensive network of trails, RMNA is a
very popular destination for people in the region. In addition to being a
wonderful place for tranquil enjoyment, RMNA is also a little known haven for
biological richness. It’s one of those places that is often
taken for granted. I hear it all the time, “It’s just an average Piedmont
Forest, right?” … Nope. Decades of observations by local naturalists, botanists
and birders have shed light on the fact that this place is special. It is a
large biome with habitats and niches that are strengthened exponentially by the
very size of the forest. Indeed, the whole is far greater than the sum of its parts.
Furthermore, many sections of the forest are very old. This is evident in the
rich herbaceous flora assemblages noted during preliminary investigations. Age,
maturity, and size combine forces to create a complex biological landscape. What is the extent of the biological richness and variety on the
Ragged Mountain landscape? What ecosystems and habitats hide among its forests?
What are the various parts that combine to create, propel and sustain this
unique biome? It is our aim to find out.
In the wake of the most recent RMNA reservoir expansion, the
City of Charlottesville is revisiting trail infrastructure design and use. They
will be formulating plans about how best to manage and interpret the bounty of
natural and cultural resources on the land. Before that can happen the City
must know what the quality and quantity of those resources are. To that end,
they have asked Center for Urban Habitats to coordinate an Ecosystem Survey.
The primary goals of the survey are:
Work Began in early November, 2015.
This extensive survey effort will build upon the work of others (including a Bioblitz conducted during the summer of 2015) and will involve dozens of volunteers. Our work will create new findings, but it will also provide contextual information for prior findings. The survey will
include several specialized crews. Four groups will get things rolling, including
a volunteer team of prolific botanists (known locally as the “Plant Team”), a
volunteer network of Avian specialists, a youth group dedicated to documenting exceptionally large trees, and an Ecosystem team focused on
conducting natural plant community classification surveys. Other groups will be
added as the 2015-2016 winter progresses toward spring and will include a focus
on such things as reptiles, amphibians, mammals and fungi.
All in all, we have our work cut out for us! We plan to have
all data collected and synthesized into a communicable report by the end of
May, 2016. Stay tuned for short blog entries, field notes, and photographs as
the project progresses.
Devin Floyd – Center for Urban Habitats