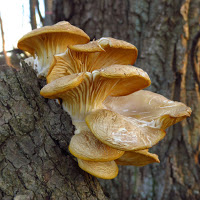 Days 3 and 4: Ragged Mountain Natural Area Ecosystem Survey preliminary walk-through came
about by needing to just hit the woods. On the evening of November 15, I
did so, by myself, with very little light left in the day. Bluebirds greeted me
as I entered the late autumn woods on the west slopes of Roundtop Mountain. My
goal was to identify any unique ecosystems on the top and south slopes of the
large hill. The adventure would take me first to the top, and eventually, on a
hunch, through the thickets of non-native species to the south. Ultimately I
would find myself standing in a unique habitat type, in the dark. Naturally, I
would return with Rachel (CUH staff, and naturalist) a couple days later to
better assess the situation. This short description summarizes the findings of
this two-day jaunt. The effort would result in the placement of two potential
test-plots.
Summary of
findings 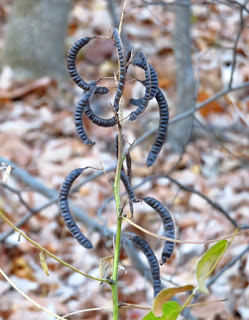 Xeric Outcrop
Woodlands: Down the west slopes of Roundtop Mtn. a xeric to dry-mesic
forest assemblage chases a spine of large outcrop boulders of gneiss downslope.
Approaching from either the south or the north, one passes through a rich basic
oak-hickory forest only to find it quickly reduced to an assemblage that is specially
adapted to the bedrock that springs from the ground. Only the species adapted
to dry shade lurk here. The basic forest trends suddenly acidic, and the
nutrients available to plants drop dramatically. Flora such as upland boneset
and chestnut oak are defining characteristics. American senna and rock muhly
are present, and the margins are decorated with a diverse array of wildflowers
that dare not enter the sub-mesic conditions of the outcrops. The Outcrop Woodlands
extend to the hilltop, ending in a Chestnut Oak/Hickory-dominated forest with a
ground cover of 40-50% decomposing bedrock. A walking trail cuts across the habitat
at least twice, offering the nature enthusiast a great view of a rugged and unique
type of piedmont landscape. 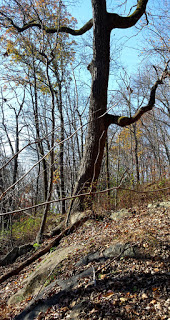 Giants: Large chestnut
oak trees lurk in this woods. Some of them are more than 4 feet in diameter and
undoubtedly were spared in a late 19th century deforestation.
Perhaps they offered shade and mast to pastured swine or sheep. An enormous
black gum tree lurks not far from the trail, disguised by its very size. The
early successional tuliptree has reclaimed the forest openings on the west and
south west slopes of roundtop, offering evidence of clearcutting or thinning.
These now race, straight as pencils, skyward. They now share the upper canopy
with the mighty oaks that were spared. Many of them are enormous, exhibiting the
decades that have passed since the pasture was released to natural forest
succession. Lastly I will mention a white ash with a diameter of 3 feet,
growing on a rock in the south slope barrens mentioned below. It stands alone
in its size but shares the sparse upper canopy with other white ash in the barrens. 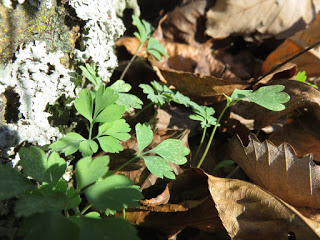 Remnant Piedmont Mafic
Barrens: To ecologists and naturalists, the phrase “mafic barren” ignites
the fires of exploration, for this habitat type holds rarities. In fact, when
found intact, it is considered to be a globally rare ecosystem that actually only
occurs in the Piedmont of Virginia. Extruding from the steep south-facing
slopes of Roundtop are the remnants of a huge mafic barren. I use the word “remnant”
because of its current state of impairment. Invasive species blanket the site,
particularly Japanese stiltgrass and wineberry. That said, many of the
indicator species for this habitat type still remain. They echo healthier times
of old. Gnarled and twisted trunks of tiny dwarf hackberry shrubs reach from
bedrock cracks. Grimmia dry rock moss is at their feet. Woodsia (cliff-fern) and
Corydalis create a strong patchwork of colonies beneath an open canopy of eastern
red cedar, white ash, redbud, post oak and devil’s walking stick. Interesting
grasses and sedges (not identifiable this time of year) are rooted on the rocks
and in the organic loam pockets around them. Not yet found, but growing in the
barrens immediately south, are eastern prickly pear and hairy lipfern. These,
as well as fameflower and other rarities, may be present but we will have to
wait for the growing season to have the opportunity to find them. For now we
will conduct a basic woody flora count. A test plot was placed in the center of
this plant community. 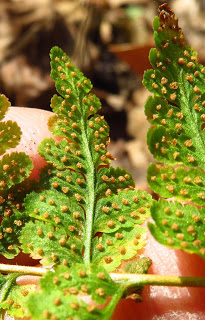 The resounding
conclusion from these two outings, and upon reflecting upon the treasures
encountered in other parts of the Roundtop Forest, is that Roundtop Mountain is
a unique landform at RMNA having a wide array of unusual, and sometimes rare,
Ecosystems. The large hill and its forests are deserving of protection and an
equally strong education outreach effort. From the deep north-facing ravine and
its rich assemblage of ferns to the basic outcrop barrens that cascade down the
south slopes; from the Oak Heath and the rich Basic Oak-Hickory Forest that
surrounds it to the Rock-Outcrop Woodlands upon its west slopes, a trip around this
little mountain leaves one feeling that there is hope for biodiversity upon our
renewing Piedmont landscape.
That said, a history of selective thinning, clear-cutting,
pasture use, and more recently, a network of trails across the mountain, have
all left the landscape heavily impacted by non-native exotic species. This is
particularly the case on the southeast slopes. The rare and unusual plant
communities still lurk there, but their heads are barely above water. They are
reaching for their final breath. We do have an opportunity to do something
about this, however. Time will tell if a unified voice will step forth with a
conservation effort at this site.