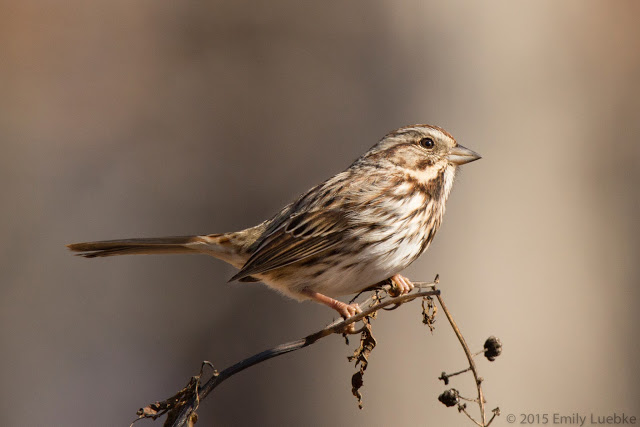 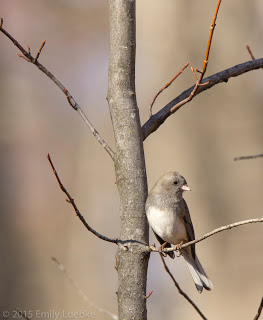 As part of the effort to document the flora and fauna of the
Ragged Mountain Natural Area [CUH Ecosystem Survey], we are collecting data on bird species reported
from the site.  This documentation
includes the crowd-sourced data entered online at ebird, historical records,
and ongoing observational records from local birders.  As of early January, 2016 we have identified
117 species of birds reported from what is now the Ragged Mountain Natural
Area, and it is clear that we can add to that list.  Recent outings have turned up a Cooper’s
Hawk, Common Goldeneye, Red-shouldered Hawk, and an Osprey, along with a wide
variety of winter woodland residents.
Above: Song Sparrow, Melospiza melodia
Left: Dark-eyed Junco, Junco hyemalis

One interesting source of information is the 1949 article in
The Raven, a publication of the Virginia Society of Ornithology, authored by
the late Mo Stevens.  For this article Mo
produced an annotated checklist of birds in Albemarle County, and for some of
the more unusual species, he included notes about locations.  This was most helpful for the waterfowl on
his list.  He referred to the current
Ragged Mountain Natural Area as the “city reservoir”.  In the 1930’s and 1940’s there were many
fewer ponds and lakes in the county, and this reservoir was visited often by
both Mo and other local birders.  His
list included Common Loon, Red-necked Grebe (at that time known as Hoboell’s
Grebe), Tundra Swan (Whistling Swan), Northern Shoveler, and Long-tailed Duck
(then known as an Old Squaw, pictured left).
According
to the article, the dam-keeper photographed a Brown Pelican at the reservoir in
1947, and Mo identified the bird from that photograph.   We are
lucky to live in an area that has this sort of historical documentation, as
well as a large group of active current birders who continue to report on
interesting observations. 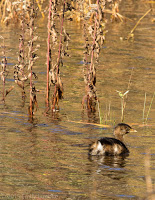 Today, 67 years later, the Ragged Mountain Natural Area is
still a valuable resource for birders and other nature enthusiasts.  The reservoir itself is a magnet for a wide
variety of waterfowl (Pictured left: Pied-billed Grebe, Podilymbus podiceps), and the forests that surround the reservoir are
attractive to many resident and migrant species.  The existing and proposed trails that
circumscribe the reservoir make the property more accessible than ever, and
this wonderful resource is extremely close to the city of Charlottesville.   So, check it out, and take your binoculars
along!