There is a small forest behind Jackson-Via Elementary School. At first glance it looks like any other forest in the area. But, this one is special, as it has great diversity over short distances, making it a phenomenal outdoor classroom. The different kinds of trees located in different areas speak of different soils, changes in slope and aspect, and most significantly, a diverse history of human influence. The understory of shrubs and saplings and the lay of the land hint at the geology and soils below. This is an urban forest, surrounded by human activity: school to the north, Food Lion and parking areas to the east and southeast, housing to the west, and Interstate 64 to the South. It is a small island of life separated from the other forest corridors in the area. 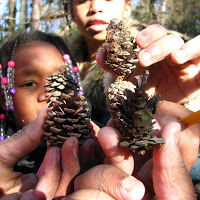 The forest is full of trails, newly constructed and unfinished. As with most forests , this forest is full of mysteries and natural treasures. Forests are like a books filled with stories of the past and when one can recognize the clues that are available, the book can be read! From old farms and cattle fields to ancient oceans, old property lines to recent storm water damage, evidence of change is everywhere. There are clues about future events as well, as a rich pine forest plays host to oak, maple, beech and poplar saplings. A little glimpse of what I believe the future holds for this forest, and for the humans living around it, could be had in watching this group of young children get their feet muddy and hands dirty … getting closer to that which supports them, and asking “why?”, “what?”, and “how?”.

Today we romped…literally. A class of third graders, under the guidance of “The Art Lady” (Eileen Butler) and myself, we launched into the forest to see what we could find. We were armed with a map provided by Chris Gensic of Charlottesville Parks and Trails (thank you!), journals, and a bunch of really cool reclaimed iPod cases.

Things we discovered, and topics explored: 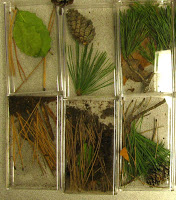 Trees: The divide of the forest is easily recognized this time of year, with the East side being a mix dominated by coniferous (evergreen) trees….mostly Pine species. The west side of the forest is dominated by deciduous trees. The dividing line is right at the trail entrance, which is very very cool. We took note of the very rough and scaly bark of the pine trees as we entered the eastern forest. A variety of needles and cones covered the ground, and we guessed that maybe four different kinds of pine trees grew in these woods. How many kinds and what types of pines will be explored later. We encountered the “Hugging trees”, a maple tree intertwined with a pine….among the oddest things I’ve ever seen in the forest. They actually appear to be grown together at about 6 feet above the ground, separating again not too far up the trunks. Everyone looked up. We followed the trunks to the leaves. The smooth-barked maple had no leaves (deciduous!). Many of the kids gravitated toward another understory evergreen, the American Holly.

Dirt: On this gentle hilltop slope, we had a look at the soil. It was very rich, loose, and dominated by leaf compost down to about four inches. We filled a container with a sample of dirt and made haste for the lower area in the center of the forest. There, stream side, we gathered another sample of soil. Here we saw muck, and an ice-covered trickle. This wet fine-grained muck is home to different trees. Just up stream I could see green ash and poplar. A couple of kids found gigantic sycamore leaves. 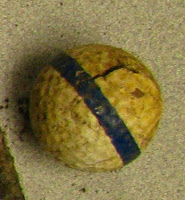 Golf ball: A human has obviously been having some fun. The ball was relatively decomposed, which means it could be 10-20 years old. Imagine what the pines in this forest might have looked like when someone launched that ball into the woods…. all of these fast growing trees would have been much smaller.

Deer: White-tailed deer obviously use the same trails we were on. Hoof prints were frequent, and were first noticed by the students.

Christmas Fern: With other green plants missing (because it is winter), the Christmas Fern dominated the “green” foliage on the ground, especially close to the creek and on west facing slopes. This fern is called a Christmas fern for a couple of reasons: the small leaflets on the stem are shaped like stockings; and, the fern remains mostly green during the early winter months. For and interesting description of this fern, and poem, try : LINK

Our time was up, and we made a mad dash back to the school! One child grabbed my compass, and another my trowel. The kids in the front had the map; “east!” they yelled. And later “north!”. Some went on the trail, some off. Over logs, around piles of downed trees, and through briar thickets, we made our way back to the school. These trails are rough, as they are in the early stages of construction. Briars, stumps and sticks reach out and grab. This unmanacured trail network is very cool, and the kids seemed to love the challenge of navigating it (despite a couple of scratches and bruises!).

Jackson-Via pine tree inquiry. The conifer diversity in the East woods is intriguing!