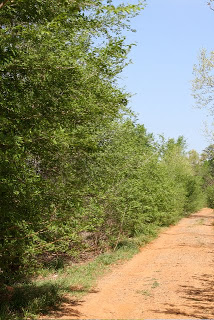 When somebody mentions invasive tree species, Ailanthus comes to everybody’s mind. But Siberian Elm is not a tree that gets much notice. In fact, many folks–even those who know a good many trees–don’t recognize the species. It’s fast growing, but doesn’t stand out. No showy flowers, not a canopy tree, no pretty color in the fall, not an especially distinctive bark. This time of year, when its circular samaras pack the twigs and branches, is the easiest time to pick it out. Even compared with other invasives, it’s a tough little tree. You have to admire its spunk. It survives bitter cold, severe drought, heavy pollution, and lousy soils. And like some of our most notorious invasives–multiflora rose, say, and Autumn Olive–it was deliberately introduced and promoted by the US Department of Agriculture. The toughness I just described led to its being planted in long rows as shelter belts to break the wind and help keep topsoil from blowing away in the wake of the Dust Bowl years. 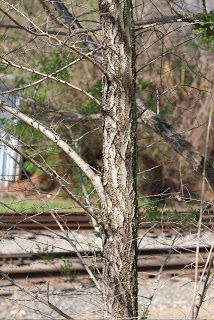 I see a lot of it, especially along railroad tracks, bridge embankments, and other sun-drenched, fairly barren, dry locales. Yesterday I paced off a tenth of a mile along the railroad tracks that cross Meade Avenue, and counted 639 Siberian Elms in that stretch, growing in the thin strip between the railroad right of way and a dirt road. All of them were young–anywhere from waist high to maybe twenty feet tall. Siberian Elm was so dominant that no other species there–a few Autumn Olives, a couple of Callery Pears, and other strays–was even worth counting. There’s a lot of it in the vicinity of Free Bridge, on the city side, and when walking around town you can see a number of larger specimens here and there as yard trees. 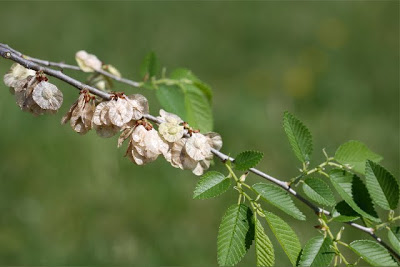 I’ve attached a few pictures. The first, a thoroughly bland photo, shows an unbroken wall of Siberian Elms on the left side of the dirt road I alluded to. The second shows the typical bark of an immature tree, maybe five inches in diameter. The third shows a typical branch, heavily festooned with samaras. This is a tree that grows fast and produces bountiful seed crops at a young age, which–in addition to its toughness–gives it another competitive edge.-Tony RussellSiberian Elms, Part I