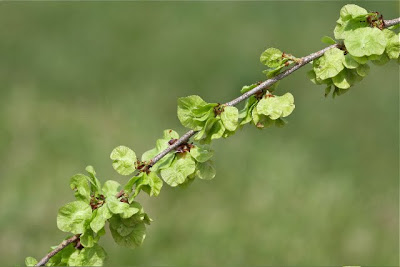 Siberian Elm Twig, April 3, 2010.
It’s leafless, but the twig is filled with the vibrant green of its young samaras, which are thicker than the leaves on many trees at this stage of the growing season. I’ve not seen it written anywhere–maybe someone can point me to a good source–but I take it as almost self-evident that the young samaras are photosynthesizing like crazy.
Siberian Elm, as the photo shows, is a prodigious seeder. Flowering and seed development demand high-energy inputs, and the boost from the seed coverings would be an important supplement to energy stored in the roots during a very critical time. I expect the same thing is true of many if not most wind-pollinated trees, the vast majority of which are green-flowered and have seeds that are green for their early development, until their leaves are fully emerged. (Think of maple keys, for example.)
Just to pursue the point a little further, young twigs are often green, and then darken as the leaves emerge and the season changes. Stipules are green while they are shielding buds, and then often drop off once the leaves are established. Seeds, the bark of twigs, and stipules–they all have access to the vascular system, and their rich green coloring must indicate that they all have chloroplasts. It doesn’t require much of a leap to think they are performing photosynthesis on a temporary, transitional basis until the leaves are fully in place and functioning. As Tim Hughes mentioned to me, cactuses seem to photosynthesize just fine with no leaves.