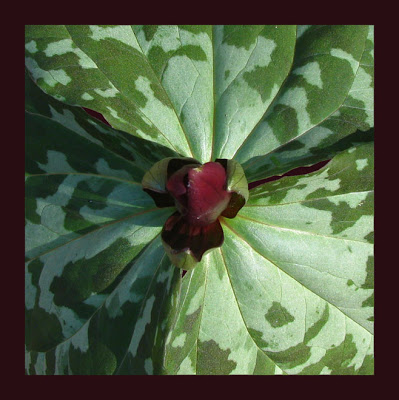 April 2, 2010. Six native plant loving individuals set out on an excursion to witness the lovely display of the locally rare Toadshade Trillium. We walked along the Rivanna trail on the north side of town. Beneath our feet were rich stream deposited soils…and beneath that ancient rocks of the Lynchburg formation…metamorphosed silts and sands deposited on the eve of land plant evolution. We walked at the base of a hill held up by metamorphosed magma….the same mineral rich formation that attracted the placement of the University of Virginia. T.J. knew his rocks and soils. 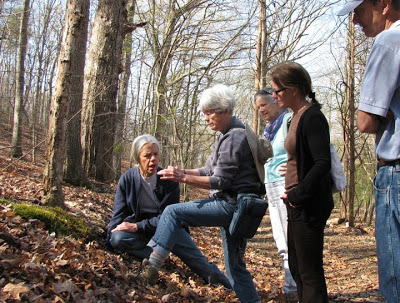 In order to fully absorb the unfoldings of spring, the group of Trillium stalkers stopped regularly . The non-native plants had leafed out early, making them easy to pick out in the still barren woods. The forest mix was relatively diverse, undoubtedly because of the variety of adjoining ecosystems and change in slopes, the distinctly different geologic substrates, and the variety of historic land use.

What a Queenly flower! These flowers are nothing less than elegant. The goal of this outing was to locate and observe this flower. We were not disappointed! We found at least four patches of flowers, the last of which contained hundreds of plants. The colony looks strong, but concerns were expressed over the planned “restoration” of the area, and how easy it would be to accidentally eliminate these rare and wonderful flowers. As far as I am aware, this is the only population documented within the City of Charlottesville and only one other locality of wild growing Toadshade trillium has been recognized in surrounding Albemarle County. It is unclear if this stand is wild, or if they escaped a garden long ago. 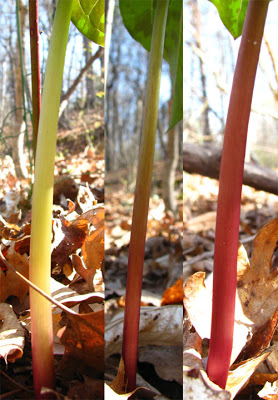 We found wild ginger intermingled with the Toadshade.

This nonnative yellow flower, Fig Buttercup (or Lesser Calendine), can be destructive to native ecosystems. It flowers early, putting it ahead in the ephemeral race. It can also spread, forming dense ground cover and crowding out native wildflowers. For more Information, check here: Fig Buttercup

On our return walk, a small raptor moved through the upper canopy. It sounded like some type of woodpecker (to us non-birders) and when it finally became visible the long tail and distinct posture became more noticeable. It was a woodland bird hunter; an accipiter; the Cooper’s Hawk.

To learn more about this bird, and to hear its distinctive “cak-cak-cak” call, check this out: Accipiter cooperii 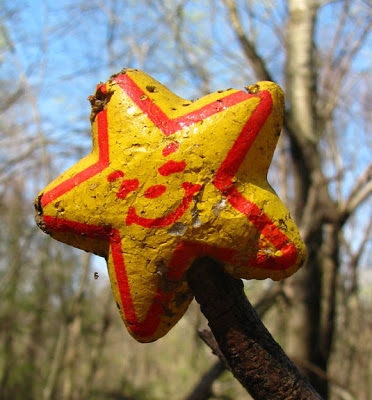 Made in China. A smiling star. This image is a great symbol for the ecological mixing pot that exists in urban areas. The human and the non-human are tightly intertwined…as are the native and the non-native. Historic and modern human activity can be read in all aspects of the landscape…whether it be in a forest mix that speaks of old field abandonment, or a plastic smiling star washed onto the floodplain by the late winter floods. In this star’s smile is the joy of a spring woods walk. But also in that strange and fixed smile is a reminder that we must never forget the ramifications of our actions. The well-being of Homo sapiens is inextricably bound with environmental quality….always has been, always will be.