Skip to content
With recent stories of raptor sightings around Charlottesville, including Osprey and Bald Eagle, I’d like to share one of Bill Dunson’s stories with you. It introduces a very fierce predator…the Great-Horned Owl, and its occasional interactions with the Osprey. I have seen several accounts of Bald Eagle and Osprey around town, and imagine these and the Great Horned Owl encounter one another frequently in the vicinity of the reservoir and Ivy Creek Natural Area….and maybe some of the larger parks closer to the city as well.
Here’s Bill’s story: 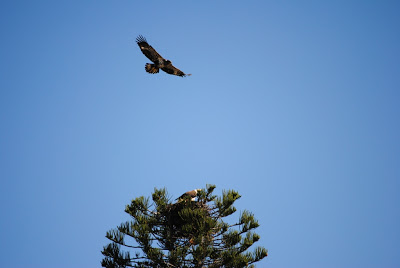 There can sometimes be great drama in the lives of birds as well as humans, as we have been observing a pair of ospreys and their tormentors, a pair of great horned owls. 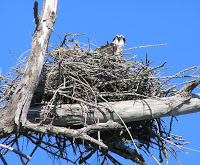 We have not directly observed all the specific interactions of these two wonderful species, but can surmise what must be happening. It appears that the owls drove a pair of ospreys from their nest and occupied it (see photo of owl’s head just above the edge of the nest). Then the ospreys moved further down the island at Stump Pass State Park and built another nest (see photo) and seemed to be happily engaged in domestic bliss. But just yesterday it appeared that the osprey pair had left the nest and were flying around somewhat distraught. The male was carrying a stick and chasing the female and no one was minding the nest. We are afraid that something may have happened to the baby ospreys or the eggs; perhaps the owls are involved or not- we do not know. 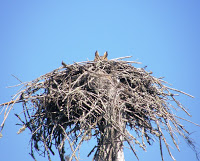 A pair of bald eagles also moved from a nearby nest site occupied last year and built a new nest in a tall Norfolk Island pine just north of the owls, where all seems to be well, except that here we can see in a great photo by Paula Kaye that an immature eagle is harassing the adult on the nest! Eagles also have quite a lot of trouble from owls themselves but in this case junior may want to inherit Mom’s territory or maybe is just curious about what married life is like.
So when we might think sometimes about how wonderful and stress-free the lives of animals wild and free in nature must be- think again! Life is a struggle, perhaps for creatures great and small?
Bill Dunson
Englewood, FL
For more information on these three species: