Ipomoea pandurata, commonly called wild potato-vine, manroot, or man-of the-earth is a morning glory species that is native to the eastern half of North America. Grocery store sweet potatoes (Ipomoea batatas) are a close relative native to Central and South America. Like sweet potato, wild potato-vine has a large tuberous root that can be eaten. However, it is said to be quite bitter, even if cubed and boiled in at least two changes of water and then roasted, as recommended.  That said, if times get tough, yard-long roots weighing 25 pounds are reported and could serve as an emergency food source. In the times before hoards of Europeans invaded and built a grocery store on each square mile, finding dinner was often a bit of an emergency situation for the inhabitants of “Turtle Island” (North America).

Some of these indigenous people are said to have called wild potato-vine mecha-meck, meaning “the one that has a large vine” in the Algonquian language known as Unami. According to Wikipedia, the last fluent speaker of Unami in the United States, Edward Thompson, of the Delaware Tribe of Indians, died on August 31, 2002. His sister Nora Thompson Dean (1907–1984) is credited with providing valuable information about the language to linguists and other scholars. 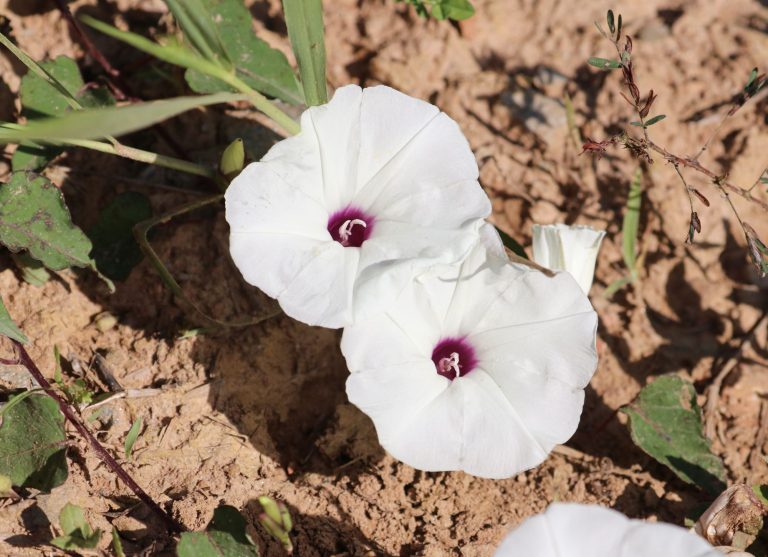 Of course, humans aren’t the only animals to take an interest in wild sweet potato-vine. Many species of bee and butterfly visit its flowers to feast on nectar and pollen, including a morning glory specialist, Cemolobus ipomoea (the morning glory bee). A whole host of tortoise beetle species feed on the foliage, as do Chaetocnema confinis (the sweet potato flea beetle), and Typophorus nigritus (the sweet potato leaf beetle). Larvae of these two beetles also eat the roots.

You can find Ipomoea pandurata in dry forests, woodlands, and barrens. I usually notice its large (3”) white flowers blooming on road banks in high summer.